Earlier this year, I attended Blog Wars 9 (run by Alex who runs From the Fang) and had so much fun that I decided to attend Blog Wars X later this year.
Last time round I took my burgeoning White Scars army. I had three great games against three great opponents and decided that this time I would stay with a bike army, but change chapters. I have decided to take my Dark Angels, but not only that, I will be taking an all Ravenwing army! I have really been enjoying the new Dark Angels codex and want to see how the boys in black will perform in a competitive setting.
I've been thinking of taking the Ravenwing for a while, so much so that I contacted Alex to clear up the Ravenwing Strike Force issue. For those of you that don't know, the Ravenwing Strike Force comes with three HQ choices and the ability to re-roll your warlord trait. The only problem is that all models/units in the formation must have the Ravenwing special rule and the only HQ unit with this rule is Sammael (either on his jetbike Corvex or in his landspeeder, Sabreclaw). This means that those inviting two spare HQ slots go to waste and my bike-mounted Librarian has to cry into his pillow at nights as he can no longer ride with the big boys. Although there are ways to field other bike-mounted characters (such as running Unbound, it's not like I needed friends anyway), but no way to get them in an all Ravenwing army. 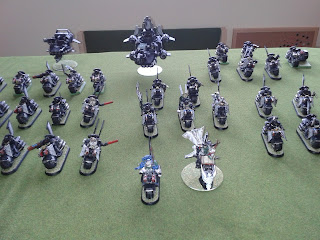 Alex recently made a ruling on the Ravenwing strike force, which boils down to:

EDIT: It was pointed out to me in the comments below that my army is not actually Blog Wars legal as it features 3 detachments/formations. In order to fix this I will fold either the Attack Squadron or Support Squadron into the Ravenwing Strike Force. I haven't decided which special formation I want to lose yet, I'll need to do some more playtesting before making my final choice, but it'll most likely be the attack squadron being part of the strike force instead. Thanks to Anonymous for pointing this out.
THE ARMY
1. Sammael
The warlord for the army, Sammael is a tough character who can do some damage in combat. He comes with toughness 5, eternal warrior and a 4+ invulnerable, so should be able to withstand a fair amount of damage in combat. He also comes armed with an AP2 power sword that strikes at initiative, great for dealing with terminators or other marines. His warlord trait is also valuable, giving him an extra 3" charge distance should help ensure that he gets into combat when required.
2. Librarian
I really like the new Interromancy powers. The librarian has the ability to severely weaken enemy units if he get the right set of powers and giving the Black Knights rage will make them a very powerful combat unit. Mounted on a bike, he should be able to get in range to use his powers as many of them have short ranges.
3. Black Knights
I have taken two units of these elite bikers, one as a command squad. These are the hard hitters of the Ravenwing. Their plasma talons should be able to make a mess of most units and they get a massive 4 attacks on the charge at S5 with rending. They also get re-rollable 3+ cover saves as standard, which should be a nice boost to their durability. The Ravenwing Standard is essential in the army. I seem to have a knack for failing hit and run rolls with characters on a 6.
4. Ravenwing Bikers
I have taken three units of bikers, one armed with grav guns, one armed with plasma guns and one armed with meltaguns. They have good durability and mobility and should hopefully be able to deal with most threats.
5. Dark Talon
This is the unknown element in the army for me. I have never used one before and have just picked up the model. I should hopefully get some practices games in with it before blog wars. On paper, the Dark Talon should be able to deal with just about any unit on the board and its bomb should severely diminish the combat capacity of units that the Black Knights want to charge.
6. Ravenwing Attack Squadron
I have decided to focus on a tank hunting role for the attack squadron, giving the squad two meltaguns and the landspeeder a multimelta and typhoon launcher for tank hunting potential. The detachment gives a nice bonus to hit for the bike squad too. This is nice as there is nothing worse than putting your bike squad right in front of the nasty enemy tank then missing with both meltaguns.
7. Ravenwing Support Squadron
I have only used this once before, but found it very useful. The Ravenshield rule is great, allowing you to shoot extra overwatch at a unit with this much firepower should cause a fair amount of damage. I am concerned about having all the speeders in one unit. This gives them a big footprint on the board and can potentially reduce the capabilities of the Darkshroud by keeping it away from other units. I will play some games where they are in the support squadron and separate to see which I prefer.
I need to get more practice games with the army (I haven't had one yet with it!) in the two months left before blog wars.
Already, there are a few problems that I forsee with the army:
1. Low Model Count
The army is quite small (34 models compared to 54 in my White Scars blog wars army), so the loss of any units will hurt in a game.
2. Reliance on cover saves
Obviously, Jinking is going to give me a huge boost to survivability but will also severely reduced my firepower. If I come up against Tau or another army with lots of ignores cover fire, I will be in big trouble.
3. Imperial Knights
These may give me a problem, though hopefully I have enough high strength and tank-busting firepower to deal with them.
4. Objective Secured
My army does not have this. It was a vital rule for me in the last blog wars games and I may end up missing it this time round. It will be especially important in the modified relic mission that is played in game 2.
There are several changes that I could make to the army based on its performance in the practice games. These are:
If you have any thoughts on the army or suggestions to change it, let me know below.
Posted by Mike (St Andrews Wargaming) at 09:00