Last week, the campaign to control the Kharysian sector of Medusa IV began in earnest. I emailed all the players that had signed up for the campaign with the rules, starting map positions and their very own, personal secret objective to complete during the campaign.
On Thursday night, the first games of the campaign kicked off as the players had sent me their map moves for the first turn. 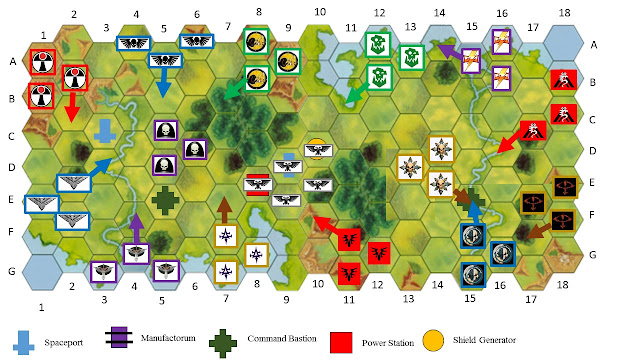 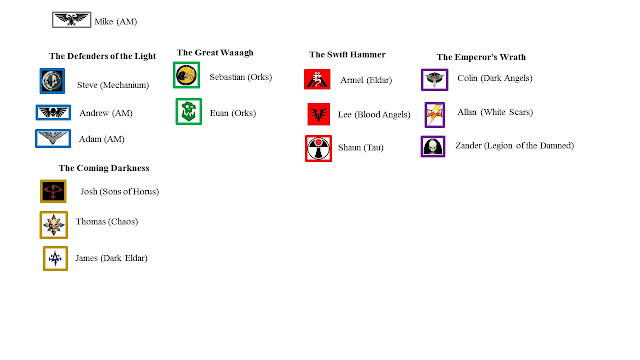 The Coming Darkness started strong, the boys in this alliance being amongst the first to get back to me with their campaign moves and the first alliance to completely send me all their moves for the turn. The two Chaos armies in the alliance appear to be converging on the Mechanium force at the bottom of the map. Whether this will go well for them will soon be seen. Steve's Mechanium decided to attack the Command Outpost too, providing the first set match of the campaign.
The Swift Hammer were the next to complete their moves, their spread out forces moving to occupy the neighbouring territory, quickly followed by the Defenders of the Light.
The Orks began their march into the woods and towards the Guard stationed on the planet, while the White Scars moved to combat the nearby Ork menace.
The players will have two weeks (two club nights) in which to complete their games for capturing their tile, the next post will detail the successes or failures of the first battle phase and the next moves the players made on their campaign for domination!
Posted by Mike (St Andrews Wargaming) at 09:00