This week's battle report was another for the Medusa IV campaign that I am currently running. The battle was 1850 pts of my Ravenwing vs Andrew's Astra Militarum Armoured Company.
My army was a slightly modified version of my proposed Blog Wars army. I dropped the Librarian and added an Interrogator-Chaplain with the Mace of Redemption. I also dropped the Dark Talon and took another bike squad armed with a flamer. This was unintentional, I thought we were playing 1500 pts so I never took my proxy Dark Talon (I am currently attempting to build and magnetize this) and had to make up the points with a spare bike squad that I had in my case. 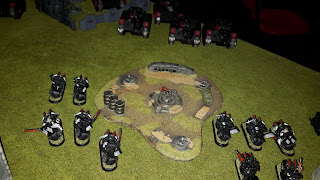 Andrew decide to take an Astra Militarum Armoured Company (from Forgeworld). I didn't know this before picking my army, but fortunately I have liberally sprinkled meltabombs throughout it. The army consisted of: 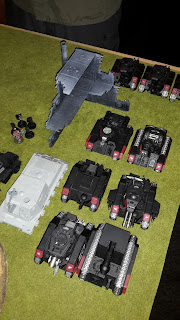 A lot of armour to face then, I hope the Ravenwing are up to the job.

We rolled for mission and got Emperor's will (we each get an objective to grab). Andrew won the roll off for table edge and I won the roll for deployment, choosing to go first.
As I was limited by the corner to corner deployment zone, I concentrated my forces. The flamer squad deployed at the back to guard my objective, while the rest of the army deployed to move forward as fast as possible. The Command squad and support squadron went on one side, the black knights on the other, with the rest of the Ravenwing between them.

My plan was to scout forward with everything and turboboost most of my army on the first turn. With AV14 in the front, most of my army couldn't harm a Leman Russ. The melta weapons could, but would have to get into range quickly. In addition, I thought that the closer I was to the enemy, the more risk they would have when firing their blast weapons at me (I could hope for a lucky scatter onto some weaker armour).
Andrew deployed with the artillery pieces at the back, enclosed in the Aegis line. The hardier Leman Russ tanks took up position at the front. 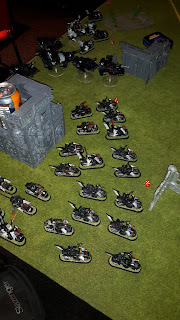 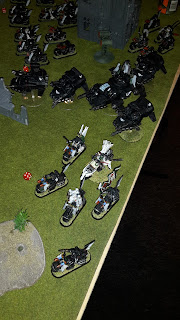 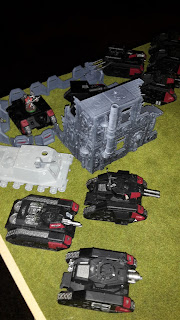 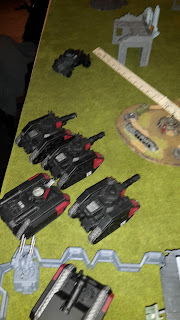 For my Scout moves, I moved almost all my units forward, eager to close with the enemy. Andrew moved the Taurox forward into the cover of the ruins.

Andrew failed to seize and I got first turn.

My first turn began with most of my units advancing on the enemy tanks. Only the flamer bike squad stayed in the deployment zone to guard the objective.
In the shooting phase, most of the bike squads and speeders turbo-boosted to close with the enemy. The tank-hunting landspeeder fired at the closest Leman Russ and managed to scored a glancing hit with one of its typhoon missiles. The Meltagun squad fired at the nearby Taurox and glanced it. The bolters of the squad finished it off, wrecking the vehicle. 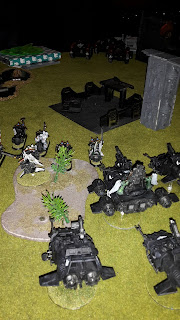 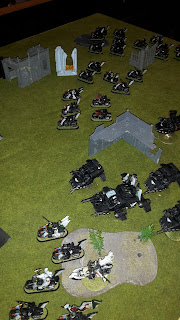 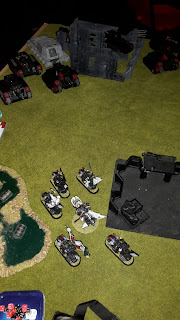 One of the Black Knights was in range of the side armour of one of the Leman Russes. I thought I would take a pot shot and see if I got lucky. The Knight rolled a one to hit with its plasma talon. No problem, they are twin-linked. I then rolled another one to hit and the gun got hot. Rolling the armour save and I got (you guessed it!) another 1. The biker died.

With no units able to assault, it was time for the Guard to strike back.

There was very little movement in Andrew's first turn, just some simple pivoting for better lines of fire on the Ravenwing.

The Tank Commander started with an order to concentrate fire on the Black Knights (forcing them to re-roll successful cover saves). The Battle Cannon shot scattered slightly, killing two Ravenwing bikers. The Black Knights survived the fire with their Jink saves. Another Leman Russ fired an inferno (ignores cover) shell at the command squad, wounding one, but it was saved on their armour.

One hellhound opened fire on the grav gun bike squad, killing one of their number. The other hellhound fired at the command squad and killed one of the elite warriors. The Executioner followed up the attack by killing another of the command squad (despite having a 2+ re-rollable cover save and feel no pain!). The rest of the tanks fired at the Command squad or Ravenwing support squadron, but were unable to get past their jink saves and cause any damage.

At the end of turn 1, the Ravenwing had gained First Blood and had rapidly closed with the enemy lines, suffering few casualties thanks to their impressive Jink saves.

The Ravenwing continued their advance on the enemy tanks, most units moving up to assault range. Only the anti-tank Landspeeder moved behind cover this turn due to its reduced accuracy. 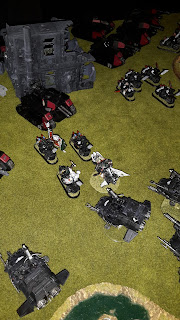 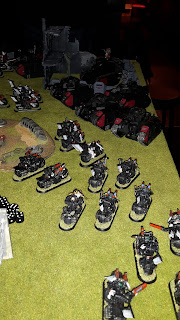 In the assault phase, several of the enemy tanks were charged, the Dark Angels hoping to destroy with grenades what their firepower failed.
The Black Knights assaulted the Leman Russ in front, their corvus hammers making short work of the enemy tank. The Command squad assaulted the Commissar's Executioner, immobilising it and forcing it to snap fire next turn. The grav gun bikers charged in at the Russ they had immobilised, easily destroying the vehicle. The meltagun bikers were not so fortunate, but were still able to immobilise the vehicle with their meltabombs. 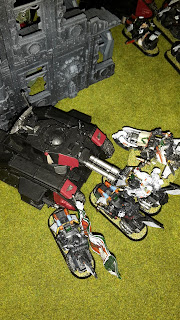 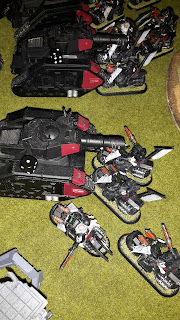 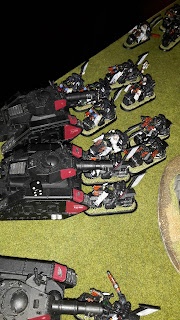 The mobile tanks remaining decided to take the fight to the enemy and began tank shocking the Ravenwing lines. No damage was suffered by the elite bikers though. The Support squadron suffered as the Demolisher and Hellhound rammed them, destroying the heavy bolter on one speeder and stunning another.

The Superheavy Macharius Omega fired at the Support squadron, but was unable to beat the cover saves of the Jinking bikers.

The Ravenwing continued to advance on the remnants of the guard tanks. 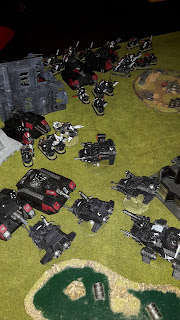 The Support squadron fired at the Demolisher, but were unable to penetrate its armour. The Grav squad fired at a Hellhound, causing 1 HP damage and immobilising the vehicle. The plasma gun squad followed up the attack, finally wrecking the hellhound. The meltagun bikers fired at the Russ they were engaged with, this time blowing up the tank. The resulting explosion slew one Black Knight unfortunate to be close enough to the blast.

On the left flank, the lone landspeeder destroyed the other Hellhound with its anti-tank munitions.

In the assault phase, the Black Knights assaulted the Medusa, their corvus hammers once again ripping through the weakly armoured sections of the enemy battle tank. Sammael led his squad in an assault against the Commissar's executioner, finally finishing off the vehicle.

This turn went very well for the Ravenwing, there were few enemy tanks left in the battle.

The remaining tanks moved away from the enemy bikers and turned their guns on them, hoping to exact some punishment for their losses. 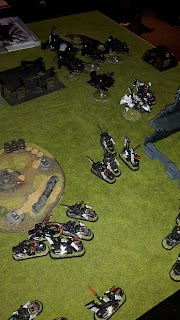 The Demolisher fired at the Command squad, but once again, could not get past the Jinking saves of the riders.
The superheavy added its firepower to the command squad, killing one of the Ravenwing's elite.

Another tank fired at the single landspeeder. The shot rang true with a direct hit, but Andrew then rolled a double 1 for the Ordnance AP roll and no damage was caused.

At this point, Andrew decided to call the game there. There were only 3 tanks remaining and very little of the Ravenwing army had been destroyed.

AFTER BATTLE THOUGHTS
Despite having won the battle, I am not a big fan of games like this. It was a really poor match up for Andrew and I think he was always going to struggle against the Ravenwing.

My Scout moves and mobility meant that I could get a turn two charge on a lot of his units and could take them out with grenades or rending attacks. Add in the ridiculous Jink saves that the Ravenwing now get and he really struggled to cause any damage to my army. Had I been using my White Scars, Guard or Orks I would have been terrified of his solid tank gunline and it probably would have ripped most of my army to shreds.

Not too much more I can say on this battle, my plan to charge as quickly as possible towards the tanks and destroy them in combat worked well. There was little Andrew could do to stop the Ravenwing with the massed Jink saves being used. Having come up against White Scars bikers and the Necron Decurion myself, I know how frustrating it can be to throw so much firepower at the enemy army and achieve next to nothing. At times it can feel pretty hopeless and does not lead to an enjoyable game.
Once blog wars X and my practice games are done, I will be able to stop using the Ravenwing for every game and my guard will be getting more involved in the campaign. It'll be nice to start using them on a regular basis once again (I might even bring out my Orks for some raiding attacks!).
Posted by Mike (St Andrews Wargaming) at 09:00