Changing Up Your Hobby- Try something new

Today's editorial takes a look at some of the changes I have recently made to my hobby and gaming routine, and how it has given me a different outlook on 40k and how I play.

Tactical Tabletop
A few months ago, I purchased the Deathwatch codex on the day of its release. I had planned to review the Codex for the blog and then re-sell it on ebay. However, after reading the codex and writing my reviews of the Deathwatch, I started the enjoy the feel of the army and decided to start my own force. 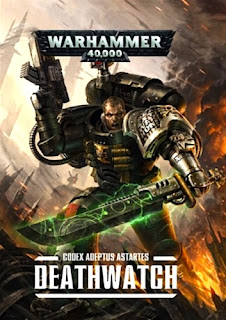 Now, I already have two Marine armies (the Dark Angels and White Scars, for those of you keeping score at home), but these are both primarily Bike-centric forces that use speed and mobility to achieve their goals in a game. I also have two horde armies, with my Astra Militarum and Ork forces, using massed firepower or combat attacks to defeat the enemy.

For me, the Deathwatch seemed like a new type of playstyle; a smaller elite force, with some potent firepower, but most likely to be outnumbered by the enemy army and requiring surgical precision to use correctly. I was keen to see how a Marine army would play that was not overly reliant on Grav weaponry and durable bikes, or fantastic re-rollable cover saves in order to win games.

Having only played a few games with the Deathwatch so far, I can certainly say that adjusting to the new army has been a great learning experience. I find that games are much tougher than I might face with my White Scars or Ravenwing, and I am enjoying the new tactics that I have to employ to try and win games.
In addition, I am also enjoying the list building dynamic of a new force once more. For my other armies, each new edition and codex brings some changes to the army, based on new rules, units or wargear, but the core of the force generally remains the same with just a few tweaks here and there.

With the Deathwatch, I am having to build my army from the beginning. I had a read of my codex and bought units that I thought would be effective and look good on the tabletop. I armed them accordingly, not knowing how it would perform in the game.

Should I go mad with upgrades to make each unit more powerful? Should I keep everything basic and go for numbers with my force? Should I focus on shooting or combat, or a mixture of both? These are all questions I need to try and answer with my army and am looking forward to seeing how it evolves as I play my games.

My first game was not great. It was against a Tyranid army with three flying Hive Tyrants. I got absolutely crushed by turn 3 and was not off to a great start. The second game was on the same night against an Iron Hands and Adeptus Custodes army. I did manage to win the game, but my army was practically wiped out with only a single drop pod remaining to secure my victory. It was a win, but it was a very close run game. I almost considered giving in and selling the army there, as I hadn't started painting it yet.

Fortunately, I decided to keep going. I learnt a lot from the first two games and tried to apply the lessons to the next one. The Deathwatch could hit hard, but were fragile and had a real problem with mobility on the table. I decided to use the Decurion-style detachment to get Deep Strike on most of my units to try and solve the mobility issues, and looked at beefing up the durability of my units through the addition of more Storm Shields, more units and some psychic powers. The results were looking more hopeful and I look forward to continuing to evolve the army as I play more games.

Pushing my Hobby Skills
Not only has starting a Deathwatch army shaken up my army list style and gameplay, I've also used it as an opportunity to try and progress my paining skills and hobby work.

When starting the Deathwatch, I was inspired by Nick's work on his Dusk Knights (as well as all the other awesome painters whose blogs I follow). Nick decided that for his new Space Marine force, he would pay attention to each Marine individually, trying to paint up a single model and focus on it, rather than painting unit by unit. Having read his progress on the blog and spoken to him about it, he says it has really helped to push and develop his painting skills and has led to a really impressive looking force that he is building up.

As the Deathwatch as likely to be an elite army with fewer bodies on the table, I wanted to use them to do something similar, to try and push my painting skills in a direction that they have not gone before.

My normal technique for highlighting miniatures is drybrushing. This allows me to quickly and easily build up highlights for a model and really suits my style of batch painting units. I have used this for all my current armies, I really like the technique and I think it looks pretty good on most of my armies. It has allowed me to get a lot of models painted to a decent standard in a short period of time.

With the Deathwatch, I wanted to try something a bit different, I wanted to try and use edge highlighting in the army- where you paint the highlights on the models directly in a controlled fashion, rather than just catching the raised sections with drybrushing. Previously, I had only attempted edge highlighting on large vehicles such as my Darkshroud or Dark Angels Land Raider. This models have lots of large, flat edges that are pretty easy to do, so it wasn't too much of a challenge to do.

The Deathwatch Marines on the other hand have plenty of small, round edges that would require some careful painting and really push my current painting skills.

My first attempts were less than encouraging.

I was a bit horrified when I took the photos under the strong light, they looked absolutely awful! Fortunately, I did not abandon the experiment there and then, I took another go at them and already saw some improvement over my first attempt, but it was still not great.

I posted up my efforts, not to showcase my awesome work, but to get some advice from the more experienced painters out there. Fortunately, they did not disappoint. Most 40k players and bloggers are happy to give their opinion (a lot of the time, whether you ask for it or not!). With some simple advice from fellow painters, I was able to further improve my skills with only about 5 models painted so far.

Another unique part of painting that I tried for my Deathwatch was to paint a single test model first. Normally, I will paint a test unit to try out a colour scheme and can adjust or change it for the next unit. This time I decided to focus on a single model to see if my planned scheme was worth it. Fortunately, I quite like the final model and have decided to persevere with the army.

I plan on painting the squads up one or two models at a time. This will allow me to get the force painted reasonably quickly, but without rushing through them and getting sloppy with the edge highlights. Hopefully, I can continue to improve my painting skills in the basic units, so that by the time I get to the characters and vehicles, I will do a much better job on them.

One of the biggest army shake ups has been the release of the Genestealer Cults army. This army has a playstyle that is very different to anything in the game at the moment and has led to a lot of excitement in the 40k community. I have plans to start my own Genestealer Cults army and have purchased a few units to get going at some point. Again, I bought the codex to review it on the blog with plans to sell it on, but enjoyed the army so much, I have decided to start one too (I really need to stop doing that!). This will again lead to a very different playstyle and hopefully give me a chance to learn some new painting techniques and work with some different army colours.

Shake Up Your Hobby
Hopefully, my experiences with starting the Deathwatch army have shown you that shaking up your hobby routine can be a fun experience.

For those of you looking to shake up your hobby experience, here are some suggestions:

1. Try a new army. Are you stuck playing the same army over and over. Why not start a new force or borrow an army from a friend to see if you like them. This can obviously be an expensive way to shake up your hobby, so don't blame me when you are knee deep in grey plastic kits.

2. Try a new gaming system. Most clubs have a wide variety of games played at them on a weekly basis. Many players are happy to provide introduction games in the hope of snaring new players. Many of these games can be skirmish-based, meaning you only need to buy and paint a few models to have a viable force.

3. Try a new painting technique. Try mixing up your painting by trying a new technique you have never used before, such as edge highlighting or weathering.

4. Try a new Chapter Tactic. If you play Marines, why not try mixing up the Chapter Tactic you use in your games. It may lead to new ways to play the game or new appreciation for other units in the game. On a similar vein, why not put some neglected units in your army that have not seen the tabletop in a while or try out some of the other formations in the codex.

How about everyone else out there? What was the last thing you did to shake up your hobby experiences?