This weekend I will be travelling down to Stockport for Double Trouble (run by Alex at From the Fang). I had previously written a post proposing some armies that I was planning on taking down to the tournament and looking for comments from readers about them. By an overwhelming majority, my Orks were selected as the army that I should take.
My original proposed army was a speed freaks type force, featuring all mounted units and a fast moving force to grab objectives and get to the enemy quickly.
I started to see a lot of the proposed armies that people were taking to double trouble and saw that my Orks would have to stand up to a lot of firepower. I had a think about what benefits the Orks could bring at 750 pts and thought that one of the biggest bonuses was numbers. Orks and Gretchin are cheap compared to Space Marines, so I should be able to build a force that would outnumber any opponent (maybe even both my opponents together depending on their forces).
After playing some games with my Orks and having a think, the force I have decided to take is: 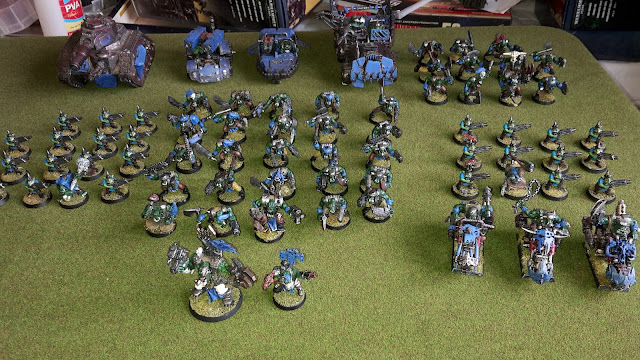 
In total, the army contains 72 models. Given that most of the armies I have seen so far contain between 12-30 models, I should outnumber any one opponent by at least 2 to 1 (if I play Rob's Mechanicum army, I will outnumber them 6 to 1!).
Let's take a look at the components of the army and see how they might be used:
Warboss
The warboss comes with the standard Power Claw and a bosspole to keep the army in check. The Warboss is a combat moster; 5 power claw attacks should make a mess of any marine units and his high toughness should help keep him alive where the armour and invulnerable save is lacking. He also gives the army a Waaagh!, helping them get into combat quicker. He can either join the large mob or go in the trukk to get to the enemy faster. 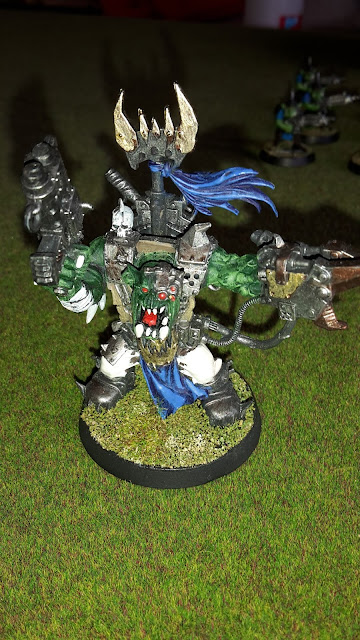 Painboy
A nice and cheap way of giving my big mob some kind of save. It was either a painboy or a big mek with a kustom force field. I chose the Painboy as he is a lot cheaper and also gives the mob a save in combat, whereas the force field only works in the shooting phase. 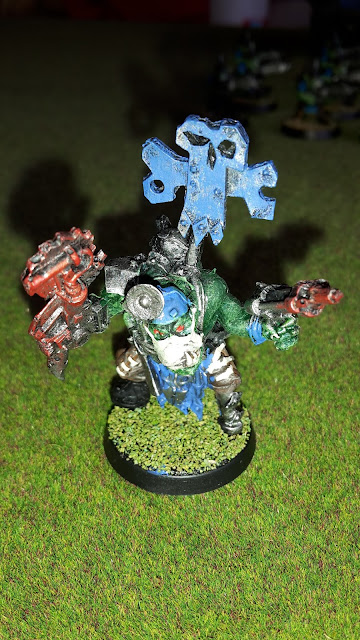 Ork Boyz
The hard units in my army are two mobs of orks. One is 25 strong and on foot, the other is 11 strong and in a trukk. Both mobs are led by a Nob with a power claw and bosspole for some marine or tank hunting power in the army. They should also be able to tear apart the mass of bikers making their way to double trouble.
The Orks may have a tough time with so many marines and bolters going to Double Trouble, but I am hoping to there will be enough alive when they get to their opponents to cause some damage. With 4 attacks each on the charge, it only takes a few Orks to cause a lot of carnage in combat. 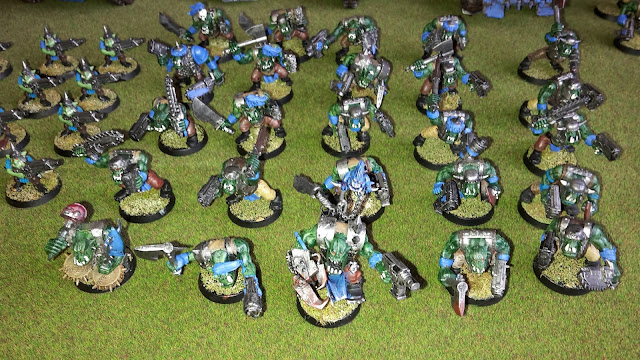 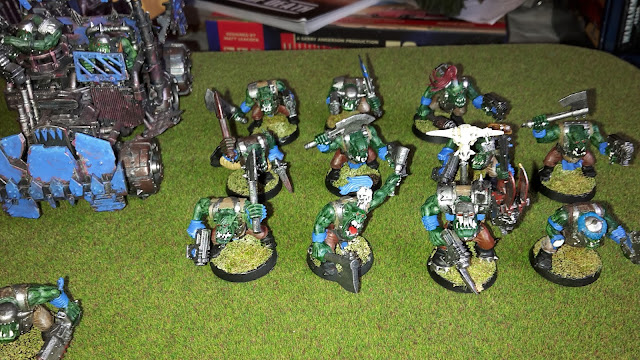 Gretchin
Two units of gretchin will be the perfect objective holders for my deployment zone. Each unit costs less than 50 pts and should be able to weather some firepower if they are camped out in some terrain and go to ground. They may even be able to shoot something to death if they get lucky. 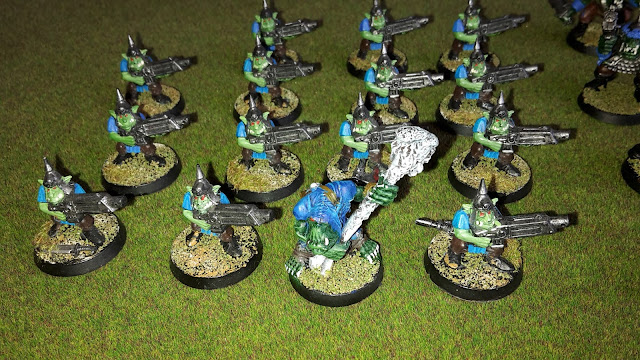 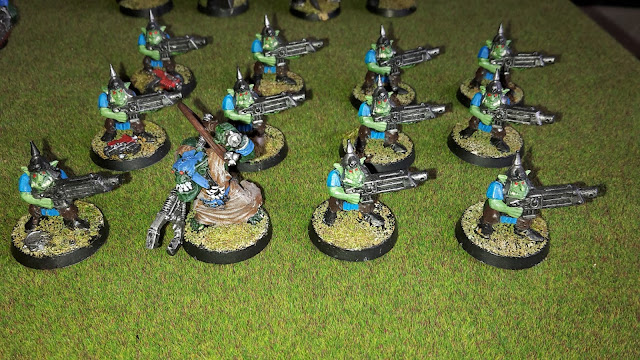 Warbikers
I took a unit of three warbikers for some fast and mobile objective grabbers. They can also put out a decent amount of firepower if they need to with their twin-linked dakkaguns. They also get a 3+ jink save if they turboboost, which should improve their durability. 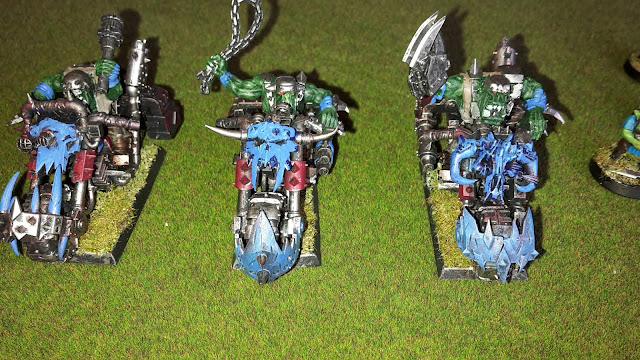 Warbuggies
I took two individual warbuggies armed with Rokkits. At a pinch, these can be used for some semi-accurate tank hunting, but will most likely be used for fast objective grabbing units too. 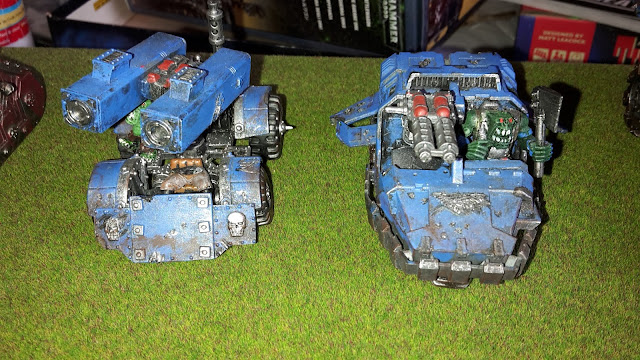 Looted Wagon
I have a Deathskull lootas themed army, it would be rude not to include something looted in my army. I took a looted wagon with a Killcannon. This S7, AP3 large blast should make all those marine armies sweat a bit when it is firing at them! Who know, it might even survive long enough to fire in this game. 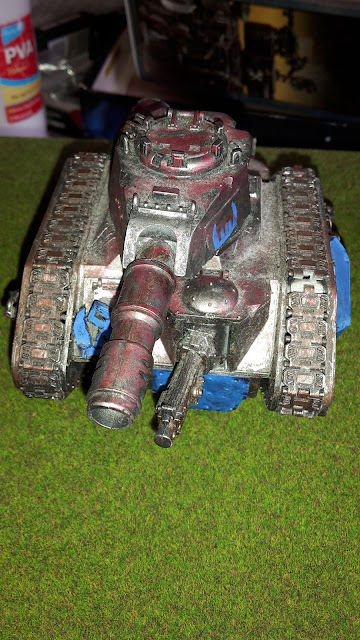 Da Plan
It's obviously hard to plan for a Doubles Tournament, especially when you don't know who your partner is going to be each game and what army they will be taking.
I am hoping each game to use my superior numbers to swamp the enemy with targets while my partner uses their (hopefully superior) firepower to attack the worst threats in the enemy armies. I have a number of fast units that will be great for grabbing objectives, with the warbuggies even being able to Outflank to get to the juicy rear armour of some tanks if I face any. My Ork horde will advance on any large threat and hopefully survive long enough to take them out. I can only hope their is an abundance of grav weaponry that my Boyz can laugh at as it bounces off of them.
I am hoping to take enough notes and photos to write up my battles for my games at Double Trouble, but doubles games tend to take longer and if I am slowly the game down too much, I will not be able to do so.
So that is what I am taking at the weekend. Is there anyone out there actually worried by my list? As Double Trouble seems like a more fun event, I wanted to take a fun army rather than a highly competitive list, but who knows how it may perform. Maybe I'll see you on Saturday, look for me living it up at the high numbered tables on Saturday.
﻿
Posted by Mike (St Andrews Wargaming) at 09:00