This final part of my review of the new Death From the Skies supplement takes a look at the new Air War missions. Six new scenarios are presented for getting the most out of games using a lot of flyers. Some of the missions seem like a lot of fun and I hope to try some of them in the future. 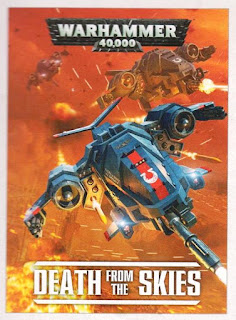 Some of the missions presented require the use of several flyers, so might be best suited for larger games with multiple players per side in order to fulfil the requirements. There are a couple of changes to regular missions that also take effect. One is that flyers are able to start the mission on the battlefield (unless the scenario states they must begin in reserve). This means you will be able to use your flyers from the very start without having to hope that they turn up early. Another change is that the game no longer ends if one side has no models on the board and only units in reserve. This is a sensible change for games likely to feature a large number of flyers in reserve and additional units in reserve and makes null deployment an even more valid tactic in this game.
Fighter Sweep
This mission does not use points values and simply takes place between two opposing armies of flyers. This represents a massive air battle, so you will not need any terrain, but will likely need a very large gaming space to properly play this mission.
The winner of the scenario is the player/team with the most victory points; 2 VP for each destroyed Fighter, 1 VP for each destroyed Attack Flyer or Bomber.
This mission uses an endless reserves type rule, where each flyer that is destroyed is returned to play in the following player turn. There are also additional rules to benefit flyers that arrive from reserve, giving them an increase in their move (to allow them to get into the action) and Preferred Enemy.
I really like this mission, it provides a very different way to play 40k and provide a more unusual game. I plan on running this mission at the club in a couple of weeks and hope to get a large number of players and flyers on the board.
I may make a few changes to the mission though. I would remove the Dogfight phase as the board represents this. With so many players and flyers, having a Dogfight phase would become too complex I think. I also may remove the no skyfire rule for the other flyers. It will be very hard for non-fighter flyers to damage other flyers if they can only snap fire. I may compensate for this by giving Flyers a ballistic skill bonus or improved jink. I'd be interested to hear what readers would think of these changes and whether they will unbalance the game.
With the large board, large number of flyers and endless reserves, I am hoping this will be a fun and bloody game of 40k.


Tactical Strike
This scenario represents an Invader trying to destroy an enemy's bunkers and fortifications.
The Defender's army must include 5 fortifications (though these are free). If they do not have the models for the fortification, they can simply set up objective markers as "underground bunkers". The Attacker has to try and destroy as many of these fortifications or underground bunkers as possible.
The Attacker gets a bonus to attack bunkers with any flyer that has a "one use only" weapon, a decent bonus that will actually help with taking out fortifications as generally these one use only weapons are high strength missiles.
The Defender gets to set up one Fortification as a Comms Nexus, meaning that as long as the bunker has not been destroyed, the Defender can automatically choose to pass or fail reserve rolls and the attacker suffers a penalty to their reserve rolls.
A decent scenario that should provide for some fun games. I think players would need to know they are playing this in advance rather than randomly rolling for it, as the game could be very one sided if the attacker's army does not contain a lot of fortification-busting weapons or wargear. Even though I don't have any fortifications, this could be a great mission to use with my trench terrain.
Lightning Assault
This scenario represents an attacker's forces attempting to plunge deep into the enemy's lines.
The Defender deploys along the short table edge. The attacker can only deploy flyers at the start of the game, all other units must start in reserve.
The object of the mission is to have most non-flyer units in the defender's board edge. The game uses random game length, but the rolling does not start until turn 8 to give the attacker time to get to his opponent's deployment zone.

In the mission, the attacker gets to make snap shots after his unit run, move flat out or turbo-boost. The attacker's flyers also get strafing run and pinning on their weapons. The defender automatically passes morale checks while in their deployment zone.

Munitions Drop
This mission represents a force fighting to hold back the enemy army with dwindling ammunition while their air force tries to drop them supplies.

The Invader must set up in the centre of the board and their army must include 5 flyers (yes, 5!), but these are free. The other player (the Warden) sets up at least 18" from the Invader's deployment zone.

One of the great special rules for this mission is that the objective markers are air-dropped onto the battlefield as the game proceeds. The five Invader's flyers drop an objective on the turn they arrive and deploy the objective along their flight path, scattering 3D6" (if a hit is not rolled).

The Invader is short of supplies, so each time they attempt to shoot (shooting phase or overwatch), on a roll of a 1 they cannot fire again until they "resupply" at an objective marker.

The Warden's troops and elites units get to go back into ongoing reserve when they are destroyed, effectively giving them lot of reserve units.

I really like this mission too. The idea of randomly deployed objectives that are placed during the game seems like a lot of fun and would be a nice mission to play, even without the flyers involved. The Invader gets 5 free flyers, giving them a lot of additional firepower, but counteracts this by giving the warden "unlimited" troops and elites reserves.

This would be a fun mission to play, but I'm not sure how many players will have access to 5 flyers in order to play this mission. It might be possible to play the mission with only 2 flyers, rotating them as objective droppers in the game.

Aces High
This is another special mission featuring one Fighter Ace flyer taking on an enemy flyer wing (so between 2-4 enemy flyers). This mission is simply a series of Dogfights, with the Ace taking on one flyer at a time. The game continues until either the Ace or all the enemy fighters are the dead.

The Ace always wins the Interception phase, so is always the attacker. This scenario should provide a quick game and could be a lot of fun to try (especially if the Ace is the victor).

Crashing Thunder
The Defender sets up the board and terrain however they choose and gets bonuses for keeping fortifications intact during the game, and sets up three objective markers. The Defender also sets up his army first. The Attacker then deploys 2 feet from the Defender's deployment zone.

Each objective is worth 3 VPs, each fortification is worth 1 VP for the Defender if they are intact and 1 VP for the Attacker if it is destroyed.

The Invader gets "unlimited" flyers, each one destroyed is put back into ongoing reserve. The Defender also gets to pick an objective to be a Skyfire Nexus if using mysterious objectives (to help shoot down enemy flyers). In addition, the Defender's units are Fearless while in their deployment zone.

This scenario gives a lot of bonuses for the Defender, forcing the attacker to go on the offensive hard. It should be an interesting scenario for both players to try.

Overall
I like the new Air War missions and hope to give them a try at some point in the near future. Of the missions, I think the first three will be a lot of fun to play, providing some great special rules and giving a nice thematic game if you choose to play them that way.

Any missions jump out as a lot of fun and something you are planning to try out?