Battle of the Bikers- White Scars vs Ravenwing

Its time to pit the premier bike units of the 40k universe against one another. Its bike vs bike, (super)mano a mano.
With the recent release of both the Space Marine and Dark Angels codices, I thought I would take the opportunity to compare the two most pre-eminent bike-mounted units amongst the Adeptus Astartes; the Ravenwing and White Scars bikers. I will compare both units based on some random criteria I just made up in my head right now. 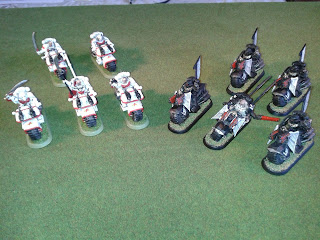 THE BASICS:
Being space marine bikers, both units have identical stats. The toughness 5 helps them a bit with survivability compared to a marine on foot. 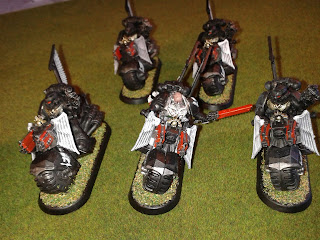 MORALE:
Being space marines, both units have access to "And they shall know no fear" which is a powerful ability to have. The Ravenwing get a slight edge in combat with Grim Resolve conferring Stubborn. This makes the Ravenwing more likely to stick around after losing a combat (whether that is a good thing or not). 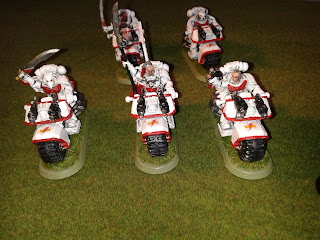 MANOUVREABILITY:
Being mounted on bikes, both units have a 12" move and access to turboboost, making them highly mobile units, great for grabbing objectives and escaping/attacking their foe. Both units also get access to Hit and Run (the White Scars through their chapter tactics), meaning they can escape from unfavourable combats and start harassing the enemy once again. Both units get access to Scout, allowing them to quickly redeploy or Outflank the enemy.
However, the White Scars have access to skilled rider. This allows them to automatically pass dangerous terrain tests, meaning that cover holds no fear for White Scars bikers. Ravenwing bikers still need to take dangerous terrain tests (whether in the movement phase or assault), so need to be more careful when moving around the battlefield. 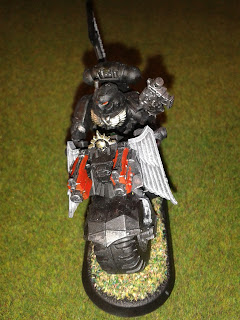 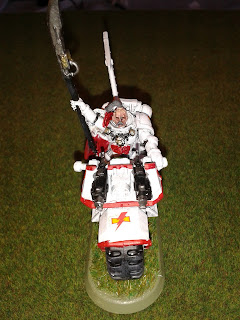 HAMMER OF WRATH:
As bikes, both units get Hammer of Wrath when they charge. However, the White Scars get +1S to their hammer of wrath attacks, giving them a slight edge. 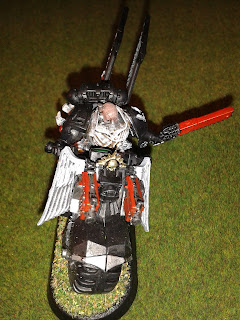 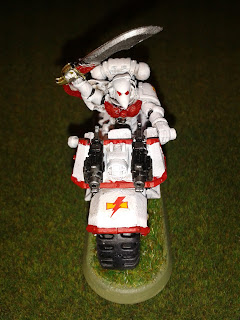 OVERWATCH:
Thanks to the Grim Resolve rule, the Ravenwing get to overwatch at BS2. This should provide them with twice as many overwatch hits as the White Scars when they get charged in combat (assuming they did not Jink).

WARGEAR:
Both units have the same basic wargear, with the Ravenwing having access to teleport homers. This is very useful in their support role with the Deathwing.

OBJECTIVE SECURED:
Only the White Scars have access to objective secured (when an independent character takes a bike). I am a big proponent of this special rule as it has helped me win hopeless games in the past. I am annoyed that Ravenwing can no longer be taken as troops in the new codex, I feel it weakens an all Ravenwing army slightly.

FORMATIONS:
The Ravenwing have access to some great formations. The Ravenwing Strike Force allows you to field an all Ravenwing army, with access to the great Speed of the Raven special rule. This allows you to count as jinking on the first or second turn when turboboosting or moving flat out, but without having to fire snap shots the next turn. This allows you to manoeuvre quickly and still fire to full effect in the next turn.
Both units can be taken in the codex strike force formation, the Lion's Blade strike force in Dark Angels, the Gladius strike force for the White Scars. The Gladius strike force gives you access to the three combat doctrines and gives the White Scars bikers objective secured. The Ravenwing do not get objective secured, but do get to fire overwatch at full ballistic skill! I feel this gives the Ravenwing the edge in the formations battle.

POINTS COSTS:
The White Scars bikers come in at 4 pts cheaper per bike (with attack bike being 5 pts cheaper). Whether the extra 4 pts is worth the cost for the Ravenwing with the additional wargear and special rules will need to be seen, but for pure points costs the White Scars come in cheaper.

Ravenwing win! By my count, the Ravenwing just beat the White Scars bikers (based on my entirely random and subjective opinions). There, now you have it, go away and re-paint all your space marine bikes black. It's ok, I'll wait here.

What? That's not enough to convince you? Who is better? The White Scars or the Ravenwing. There's only one way to find out. FIGHT!
I'm going to pit 5 White Scars bikers against 5 Ravenwing bikers with basic equipment only. The fight will take place over two rounds, one with the Ravenwing charging and one with the White Scars charging. There will be no Mathhammer here! I came to kick ass and roll dice, and I'm all out of ass (wait, that's not right.......). Each unit will get to shoot and then assault in their round. Each round was rolled three times with independent adjudication (ok, a bored cat was looking on). So pay close attention, as I start to play with myself.

With the White Scars shooting and assaulting, the result was one dead White Scar biker and two dead Ravenwing bikers. 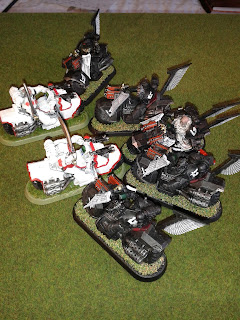 With the Ravenwing shooting and assaulting, the result was 3 dead White Scars bikers and one dead Ravenwing.

So from the real life, live rounds test, the Ravenwing again come out ahead of the White Scars!

The Grim Resolve overwatch rule helped to double the number of overwatch hits that the Ravenwing got compared to the White Scars. This didn't result in any additional wounds, but against less tough, poorer armoured foes, the casualties could mount up from assaulting the Ravenwing.

There you have it, the Ravenwing just edge out the White Scars when it comes to the Space Marines elite biker units. Did the result go the way you were expecting? Any disagreements with my category winners?
﻿
Posted by Mike (St Andrews Wargaming) at 14:26