With the new codex about to drop, I thought I would spend a few posts showing my very own Dark Angels army. Yesterday, I covered the so-called Dark Angels Green Wing, today, it is the turn of the enigmatic second company of the Dark Angels; the Ravenwing.
My Ravenwing army came about by pure chance. For years, I had only a single squad of bikers and a landspeeder as the representatives of the Chapter's fast attack force. The bike squad was purchased when the first Ravenwing upgrade sprue was released, but they had not been added to due to the expense of fielding an all bike army.


Seeing all the love that the White Scars were getting from the then new Codex (way before I began to dabble with the sons of Khan), I decided that I wanted to flesh out my bike army and took to ebay to get some bikers. Fortunately, I came across an absolute bargain on Ravenwing. A seller in Dundee was getting rid of a large, unpainted Ravenwing army. I bid on it straight away and was amazed at how cheap it went for. Seriously, I got Finecast Sammael, two Darkshrouds, 5 Ravenwing command, 20 bikers, a landspeeder,  20 scouts and a couple more bits and pieces for about £100! This was more than enough to form a sizeable mounted force. After reading the codex, I decided to purchase a couple of boxes of Ravenwing Knights to add to the force as well (after selling off one of the Darkshrouds and the scouts to help pay for the new additions).


I worked hard to get them painted up quickly (in one of my rare painting spurts), which is quite easy given that the majority colour of the model can be put down by an undercoat. Following some tips from a paint splatter article in White Dwarf, I used some darker greys to highlight the bikes and picked out the other details such as weapons and icons. I excitedly brought the complete army to the local gaming club....... and was promptly thrashed by a particularly nasty Necron force (even before the Decurion detachment nonsense). But still, I was hooked on the Ravenwing, loving the aesthetic of the black riders and the fast moving games the army can produce.

My favourite models in the army are Sammael and the Darkshroud. Unfortunately, Sammael suffers from the curse of Finecast as his sword is constantly getting snapped off. I've glued it back countless times but to no avail. I've even tried pinning it, but the blade is too slender to even drill into. I think I will need to go back and replace the hand entirely with a space power sword from on of the plastic marine kits.

I am a big fan of the Darkshroud model. The rules are ok, but it is very expensive for such a fragile skimmer. If the enemy army has any ignores cover shooting, this skimmer bites the dust very quickly! 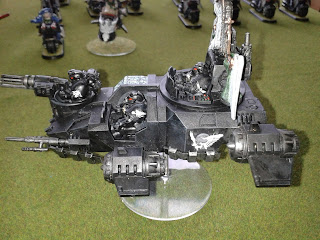 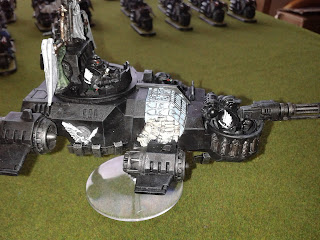 I also really like the Ravenwing Knights kits. In particular, the command squad models look really good. I love the detailed banners we now get in some of the Games Workshop kits these days. As a (self-titled) decent painter, I could never hope to paint a freehand Ravenwing banner, so I love that all I now need to do is fill follow the guide provided by the banner to get a good looking standard bearer.
I am very excited about some of the recent rumours regarding the Ravenwing (and the Dark Angels in general). It looks like they may be a useful alternative to the White Scars. It's about time, Khan's boys have been ruling the roost for too long now, its time for the original and best biker army to make a comeback and show the enemy of the Emperor why they should fear the Ravenwing.
Posted by Mike (St Andrews Wargaming) at 09:00