Part 2 if my Rise of the Primarch review takes a look at the main man himself; Roboute Guilliman, Primarch of the Ultramarines. 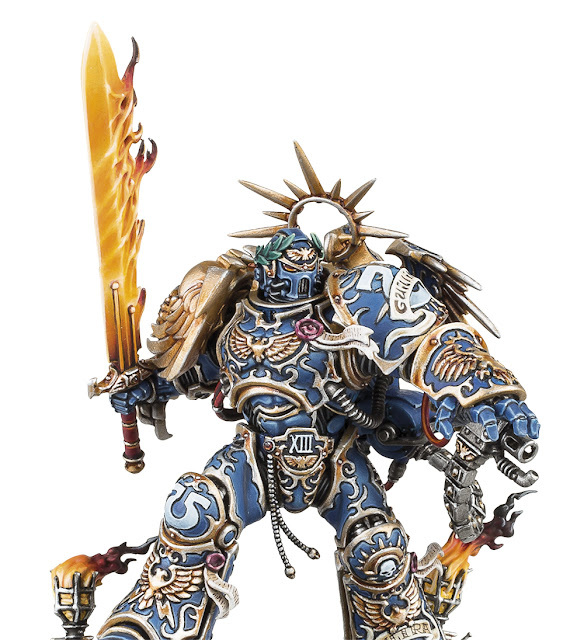 Roboute Guilliman
The Ultramarines' Primarch is a Lord of war that can be included in any Armies of the Imperium force. At 350 pts, he is pricey, but he comes with a great statline, serious combat potential and a host of special rules that make him a worthy inclusion in an army.

First off, let's look at durability. He is T6, with 6 wounds, a 2+ armour save, 3+ invulnerable save, Eternal Warrior and Feel No Pain. That is a pretty impressive list and makes him a pretty durable model. In addition, his relic armour means that when he is slain, he returns to the field with D3 wounds on a 4+.
Most units in the game are going to struggle to take him out in shooting or in combat. However, given the current state of competitive 40k, this will not be too much trouble for many units either. A couple of rounds of serious grav cannon fire will probably take him out no problem. One big disadvantage of Guilliman is that he is a monstrous creature, so no joining units to benefit from Look Out, Sir rolls (though there is a formation in the book that can fix this). So overall, Guilliman is tough, but not impossible to kill.

Combat is one area where Roboute Guilliman excels. With WS9, I6 and 6 attacks, he is going to be striking first against a large number of units and generally hitting on 3's. His relic weapons give him S10, AP1, Armourbane and Concussive. Most enemy units will easily fall before him. In addition, any 6's to hit are resolved at strength D, so odds are you will get at least one D attack each combat round, He can also exchange his attacks for a number of attacks equal to the number of models engaged within 1" of him. This gives him a powerful counter against horde units seeking to tie him up in combat. Don't forget, he also gets Hammer of Wrath and precision strikes, helping you to take out threats quickly in combat. He has fleet, helping him get into combat easier, but lacks Hit and Run, meaning he can be tied up in combat. 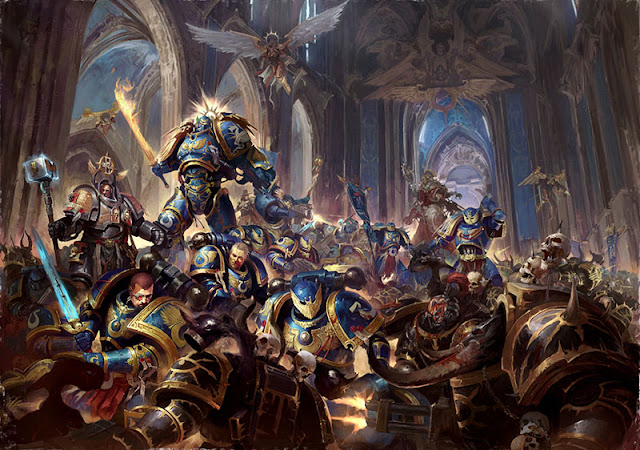 Guilliman has some moderate shooting ability. He has Precision Shots on a 24" S6 AP2, assault 3 Rending shots. He's not going to take out entire units, but can cause a bit of damage.

Now, special rules and army buffs is another area where Guillimn excels. All friendly Armies of the Imperium units get to re-roll failed Morale, Fear and Pinning tests while he is on the field. This is a very nice boost, helping your units to stay in the fight for longer.
On his own, Guilliman is Fearless and his Leadership cannot be negatively modified by any means and he can re-roll failed Deny the Witch rolls. Added to Adamantium Will, this gives him a better chance of denying enemy psychic powers targeting him. 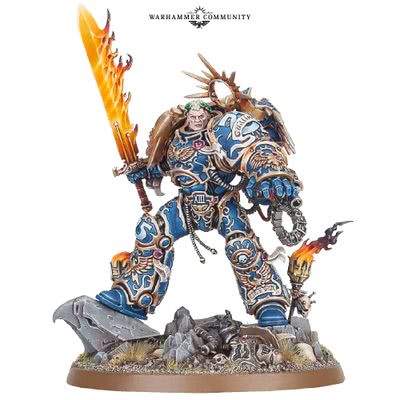 His warlord trait gives him ALL the Command warlord traits. This provides some great buffs to ant unit within 12" of Guilliman. All friendly units in range get to use his Ld value (of 10), get move through cover, +1" to run and charge and re-rolls of 1's to hit in shooting and combat. In addition, enemy models within 12" use their lowest Ld value. This makes keeping Guilliman near the bulk of your army a very useful tactic. 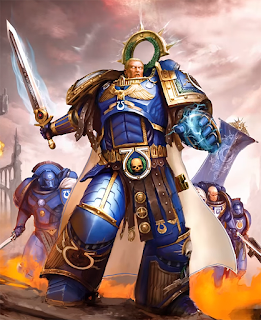 Overall, Roboute Guilliman is a solid character and great for buffing your Ultramarines army. His drawbacks are not being able to join a unit, embark in a transport vehicle and is limited to a regular 6" movement. He definitely needs a lot of support to be used effectively. Psychic support would be a great boost for him, particularly powers that allow for save re-rolls, regaining wounds and movement powers to help him get into combat.

So, what do you think of Guilliman? Will he be featured on your table?
Posted by Mike (St Andrews Wargaming) at 09:00