Welcome to part 4 of my review of the new Genestealer Cults codex. This section will take a look at the Fast Attack and Heavy Support sections of the codex. With the army being based upon an uprising of an Imperial world, they have access to a number of Astra Militarum units, as well as a couple of unique choices for the army. 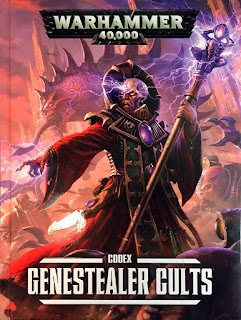 Fast Attack
The Fast Attack section allows you to take a Chimera, Armoured Sentinel or Scout Sentinel in the army. These are pretty much the same as the units from the Astra Militarum codex, but with fewer vehicle upgrade options.

Goliath Truck
Given that the Genestealers Cult army is set up as an assault orientated force, they have access to their own open-topped assault vehicle. 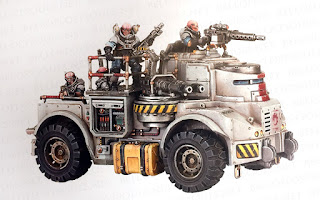 The Goliath trukk has front armour 11, with side and rear armour 10 and 3 hull points. Not the most durable of chassis, but what you are really paying for is the open-topped assault vehicle that can carry 10 models. It gains a bit more durability with its special rules; every time it suffers a Crew Stunned, Crew Shaken or Immobilised result, it can ignore the effects of the result on a 4+, though it still loses the hull point. This is very useful for the vehicle, as you are unable to purchase any sort of extra armour upgrade to keep it moving when it is shaken.

It comes armed with a Heavy Stubber and twin-linked Autocannon, so a decent amount of firepower for a cheap transport. It can be upgraded to carry demolition charges, allowing passengers to fire a demolition charge instead of firing normally. This is quite neat, but does come with the downside of taking additional damage each time it take a penetrating hit. This is added to the risk of the charge scattering back onto the vehicle when you fire it.

The Goliath Truck is a great transport vehicle for the combat units in a Genestealer Cult army. It does prevent the unit from using the Cult Ambush, but gives you a way of getting around the board faster and assaulting from the transport. I think it will be well worth taking in the army. To top it off, I really like the look of the Truck.

Heavy Support
This section of the book is pretty light, but that is probably to be expected as the army is not really set up for massed heavy firepower.

Goliath Rockgrinder
This variant of the Goliath has a reduced transport capacity of 6, while gaining a point of front armour and a boost to its weaponry. It also gets to ignore the same damage effects on a 4+ like the Truck. The downside is that it is no longer open-topped. The embarked models can all still fire from the vehicle, but can no longer assault from it the turn they disembark. 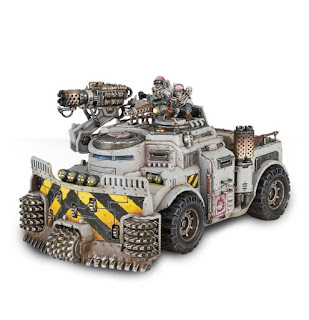 The Rockgrinder comes armed with a Heavy Mining Laser, giving you a mobile Lascannon, and a Drilldozer blade. This blade allows you to automatically pass dangerous terrain tests, as well as giving a bonus to ramming enemy vehicles and Tank Shocks, potentially giving out S10 AP2 hits on a failed initiative test, very useful for monstrous creatures with poor initiative values.

It can be upgraded to carry a torrent Heavy Flamer or a Heavy Seismic Cannon. This will be great for getting a high volume of S8 AP3 shots if you close with the enemy unit quickly.

I can see uses for the Rockgrinder in the army, providing some mobile fire support and a platform for perhaps a unit of acolytes all armed with hand flamers (unfortunately, a unit of Neophytes will not fit in it).

Leman Russ Squadron
The Genestealer Cults also get access to the iconic Leman Russ. The Leman Russ in the codex comes armed with the Eradicator Nova Cannon rather than the Battle Cannon as standard. This is a S6 AP4 large blast that ignores cover. Quite a useful weapon against a lot of troop types in the game on a very tough vehicle platform. In addition, it is Heavy and not Ordnance, so you generally won't need to snap fire the other weapons on the tank (stupid Heavy vehicles, bring back Lumbering Behemoth!). 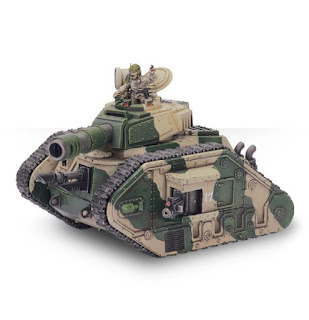 The main gun can be upgraded to a Battle Cannon (for facing marines) or an Exterminator Autocannon. You can upgrade the hull Heavy Bolter to a Heavy Flamer of Lascannon and can take a number of sponson weapons (Heavy Flamers, Heavy Bolters, Multi-meltas or Plasma Cannons).

The Leman Russ is not great in the Astra Militarum codex as there are many more units that can do the same job far more effectively. In the Genestealers Cult codex, I can see it being a lot more useful with the more limited firepower available in the army. Armour 14 is quite tough for non-grav armies to crack a lot of the time, so the tank should be fairly durable against most opponent. This could be a way to gain access to some useful anti-tank firepower (with multi-melta sponsons) or go for a bare-bones Russ with a battle cannon for taking on power armour.

Overall
I really like the two new Goliath variants. The model looks great (if a little expensive) and the rules are decent enough to warrant its inclusion in the army. It's nice that they can "borrow" from some of the Guard choices without having to ally in a Guard contingent. I can see the Leman Russ getting some use and maybe a Chimera once in a while.