Welcome to the second part of my Genestealer Cults codex review, looking at the HQ units available to the army. The first part looked at the special rules, wargear and psychic powers for the force. 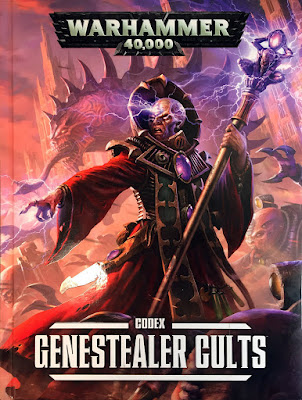 HQ Units
The HQ units available to Genestealers Cults are all pretty good. Not only are the individual characters pretty solid choices for combat or psychic powers, they all provide some nice buffs to nearby Genestealer Cult units that will improve the army.

Patriarch
The Genestealer Cult Patriarch is the top HQ unit in the codex, designed for combat and for boosting the troops around him. 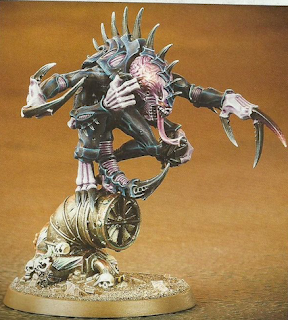 He has a very decent statline. With WS7, S6 and I7, he is pretty tough in a fight. Add to that four attacks at AP3 (with Rending and Shred) and he will make a mess of most rank and file in any force and will certainly worry any combat characters without a 2+ armour save or invulnerable save.

The Patriarch also comes with a whole host of special rules including the Genestealer Cult special rules, Fear, Fearless, Fleet and Infiltrate. He is also a level one psyker (can be upgraded to level 2) with access to Biomancy, Broodmind and Telepathy. As if that wasn't enough, he also has a 12" Fearless bubble for Genestealer Cult units. All that for the cost of a Space Marine Captain.

He is actually pretty durable, with Toughness and Wounds comparable to an Ork Warboss. He does only have a 4+ save and lacks an invulnerable save. However, when you factor in the Unquestioning Loyalty special rule, as long as he is with a decent-sized unit, it should take a lot to kill him.

He would definitely suit being placed with a sizeable combat unit such as Purestrain Genestealers for maximum effect. Depending on his psychic powers, he could really boost the unit he is in or soften up enemy units before the charge. He can be accompanied by up to two Genestealer Familiars, giving him up to an additional four S4 rending attacks in combat.

In case it wasn't clear, the Patriarch is an awesome HQ unit and would find a place in any army.

Magus
The Magus is a psyker character in the Genestealer Cults list. He is a level 1 psyker with similar stats to the Primaris Psyker from the Astra Militarum codex. He comes armed with a Force Stave and Autopistol, though lacks the invulnerable save of his Imperial counterpart. 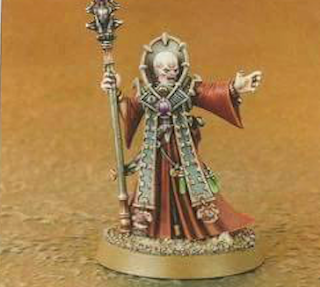 He can take his powers from the same disciplines as the Patriarch. Given how useful these disciplines are (especially the Broodmind powers), the Magus is a solid and relatively inexpensive HQ choice. I would be inclined to take one with the Crouchling Relic (and mastery level 2) to give him four psychic powers. He will be a great unit for boosting the psychic potential of the army.

Primus
The Primus is a war leader amongst the Genestealer Cults. He is not as strong as the Patriarch, but he is still a solid character. His stats are similar to a Space Marine Librarian, but with an extra wound and attack (but lower toughness).
He comes armed with a 2+ poisoned pistol, as well as a poisoned Bonesword (AP3 with the chance of Instant Death) and Rending Claws. He is not the toughest of characters, but should do well against rank and file infantry or marines in combat. With Unquestioning Loyalty, he will once again be fairly difficult to kill in a unit. 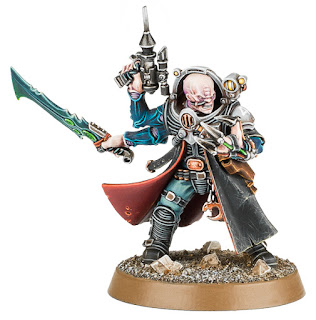 He also has Hatred (which he confers to units within 12") and Infiltrate, making him great for getting extra re-rolls on the first turn of combat.

The Primus is a solid character to lead the army. I would probably go with the Patriarch as he is simply scarier in combat and a Fearless bubble is strong in any army.

Acolyte Iconward
The final HQ unit is the Icon bearer of the army. The Icon gives any Genestealer Cult unit within 12" Furious Charge. In addition, any unit within 12" of the Iconward gains a 6+ Feel no Pain roll (which is stackable with other sources of FNP). This means that any Aberrant unit will gain a 4+ FNP when within 12" of the Iconward, which is a pretty good bonus. It will also be very useful if you get Endurance, giving the unit a 3+ FNP roll. 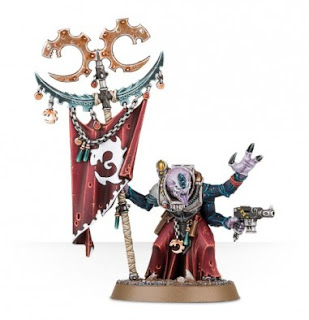 The Iconward is a very good HQ unit for the army. I would say he would be very useful if you are taking one or more units of Aberrants for the FNP bonus. Otherwise, I would say that the Patriarch and Magus have the edge for me.

Overall
I think that all four HQ choices in the Genestealer Cult are solid choices. For me, the Patriarch and Magus stand out as the most effective, but I can see a use for all four of them in any army.

I like that each character provides a different buff to the army, this is quite in line with the background of the Cult. There is even a formation allowing you to take the Patriarch, Magus and Primus, giving you additional special rules in addition to the three 12" bubble buffs that they provide. That should be a very powerful force on the table.