Game 5 of Hero for a Day was another Kill Team mission. This time, my White Scars would be taking on Tom and his Chaos Daemons. 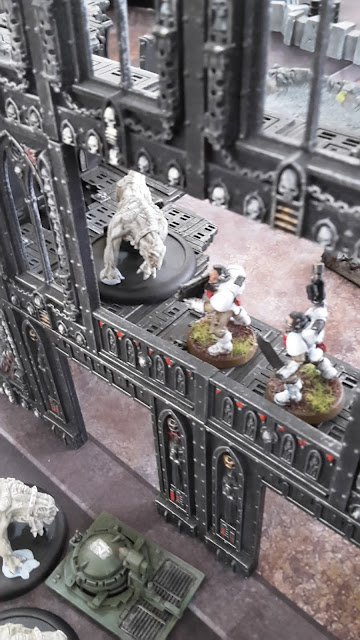 This would force me to try and take out the enemy army and the objectives, as well as not losing much of my Kill Team in the process.

My Kill Team leader (the Biker sergeant) got Zealot on the leader table. This would be very handy with the Rage bonuses.

Huh, a pretty easy list to remember. Flesh Hounds are very fast and can cause quite a bit of damage in combat, though with no shooting attacks. On a 4x4 board, it would be very tough to hide from any of his models, so I would have to try and take them out quickly.

Tom won the roll for deployment and chose to go first. Unsurprisingly, he set up all his Flesh Hounds as far forward as possible.

I set up the Sniper Scout in the top of the ruins to my right flank, with a Bolter Scout and Combat Scout in the ruins beneath him. The other two Scouts on foot went to the left beside the objective. The Bikers deployed spread across the line.
I infiltrated the Scout Bikers forward. This was done in an effort to shut down his Scout moves. 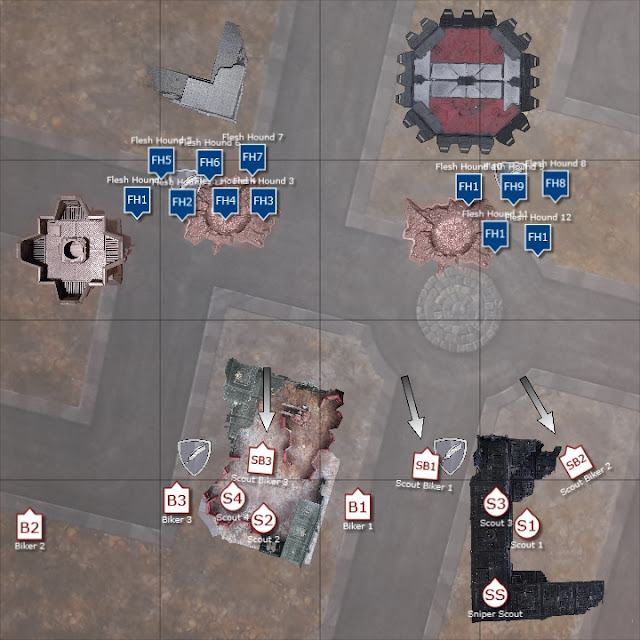 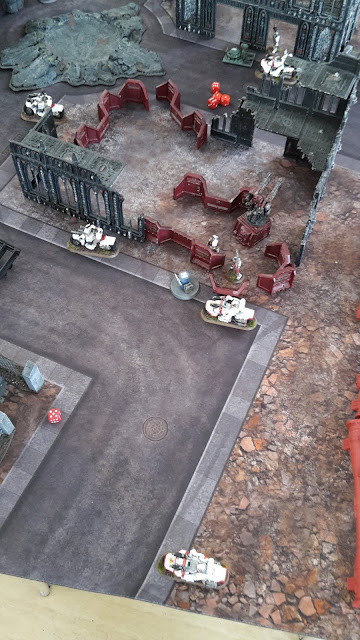 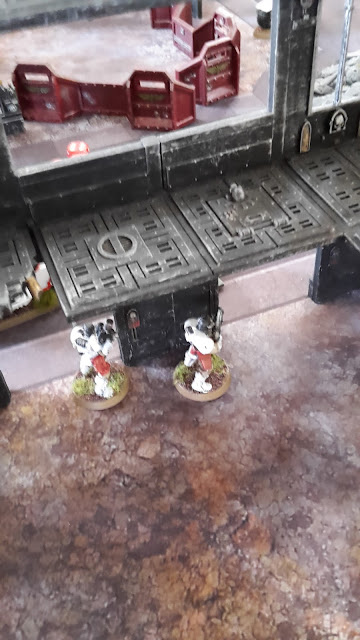 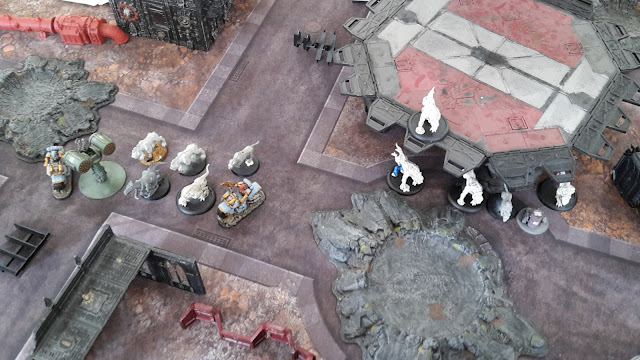 I failed to seize the initiative and Tom took the first turn. 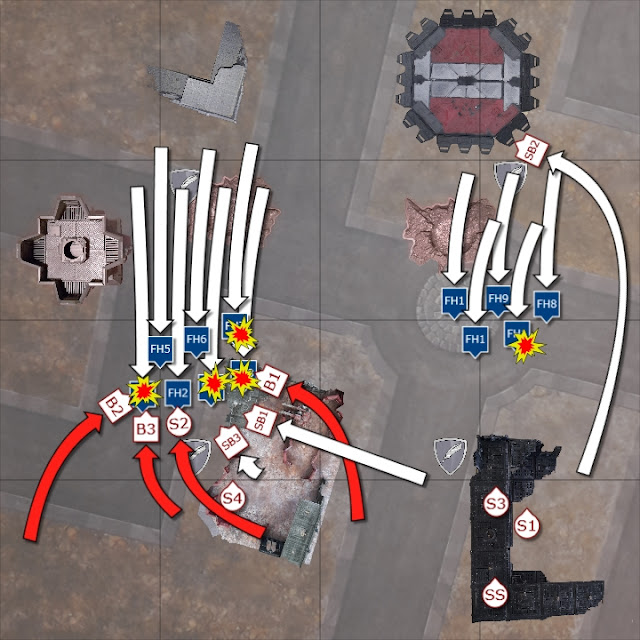 The Flesh Hounds advanced as quickly as possible, moving to engage the White Scars lines. With no shooting and no assaults, it was a very quick first turn for the Daemons. 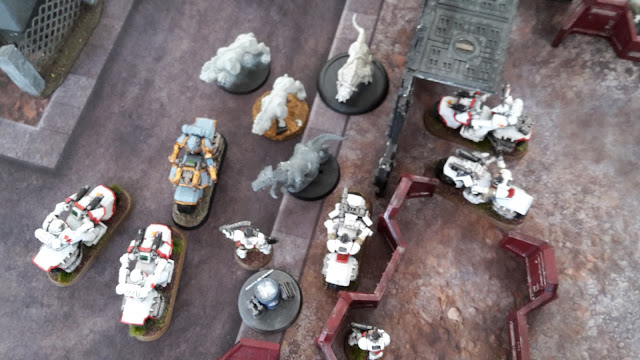 The White Scars Kill Team moved into action against the approaching Daemons. On the left flank, the White Scars focused their attention, the bikers and two of the Scout Bikers advancing to engage. The other Scout Biker moved up, turbo-boosting to get in range of the far away objective and hoping to draw some of the Daemon Hounds towards him. 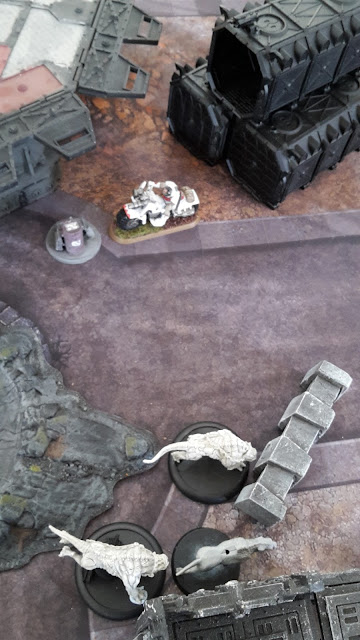 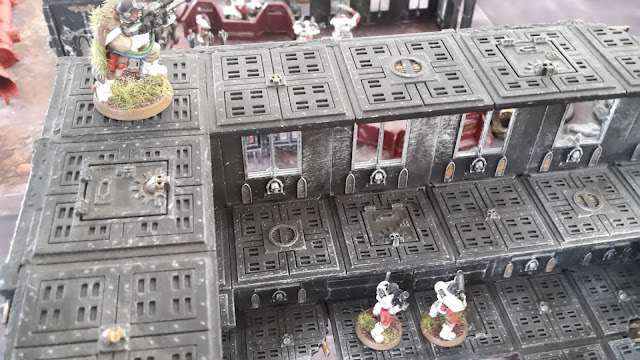 In the shooting phase, the Scouts on the right flank opened fire on one of the Flesh Hounds, bringing down one of the Daemons.
The Scout Biker fired his frag grenade launchers at the Hounds, wounding them once despite hitting many in close proximity. The other White Scars fired at the Daemons in front of them, killing two of the Hounds and wounding another.

In the assault phase, the Bikers and Scouts charged the Daemons. Two of the Hounds fell to the combined attacks of the bikers. The Scout attacked the Flesh Hound, wounding it 3 times (with his Fleshbane attacks), but the Daemonic save of the flesh hound saved all three wounds! 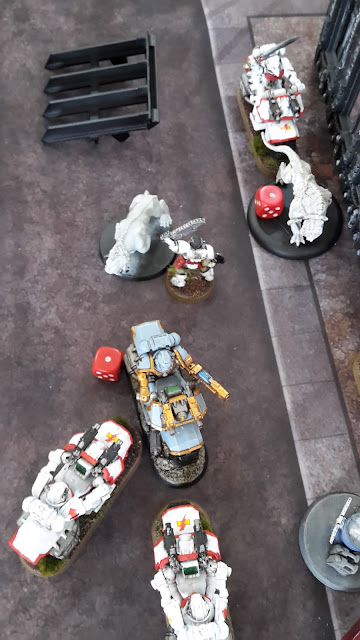 At the end of turn 1, 5 Hounds had fallen for no loss to the White Scars. A very good start for me. 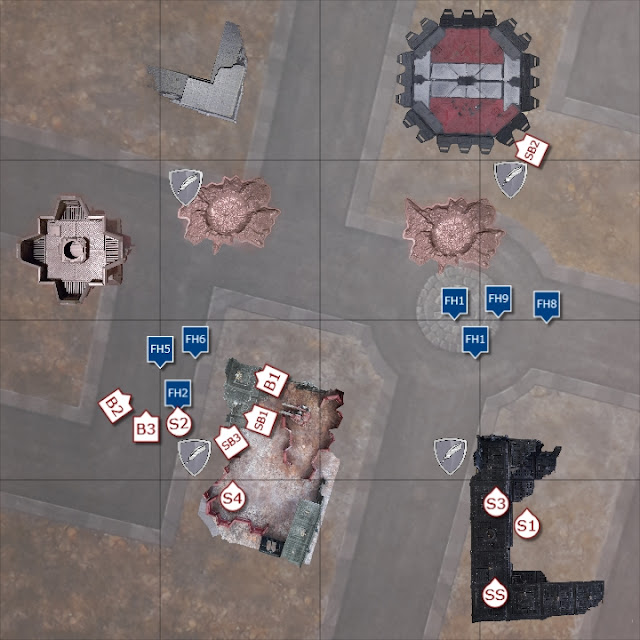 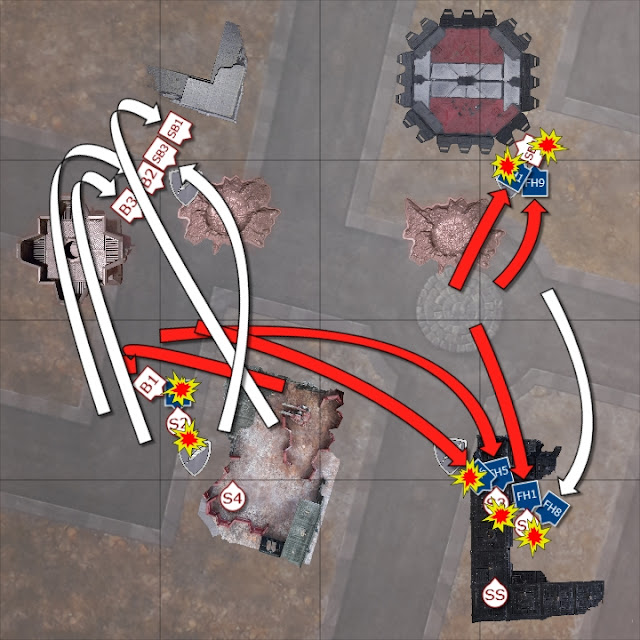 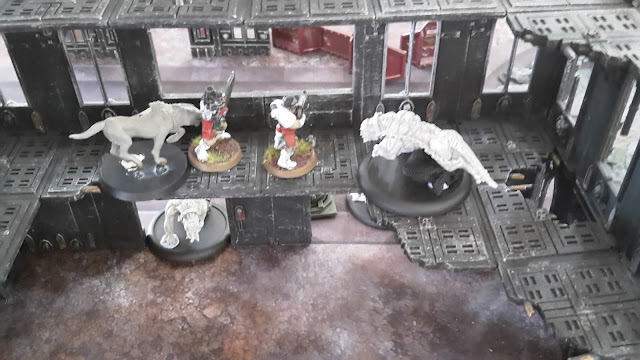 In the assault phase, the Hounds charged the Scout Biker. The White Scars' warrior struck at the Daemons to no avail and was soon brought down. The other Hounds charged the two Scouts in the ruins to the left flank, easily cutting them down. In the combat on the right flank, the Scout managed to wound the Flesh Hound once, but was slain by the Daemon in reply. 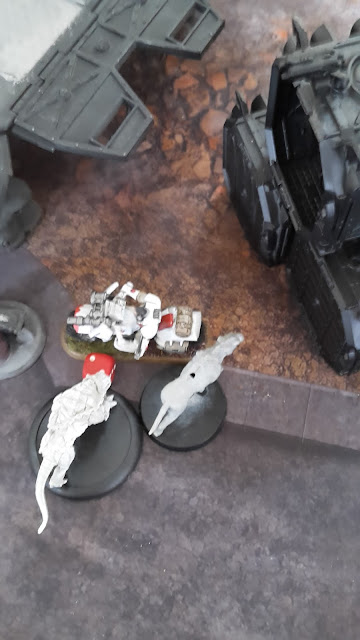 The White Scars bikers moved away from the Daemon forces, moving to secure one of the further away objectives and to move out of range of the enemy assault.
The Bolter Scout and Sniper Scout opened fire on one of the Flesh Hounds, killing it. The Bikers fired at another Hound, killing it with their firepower. 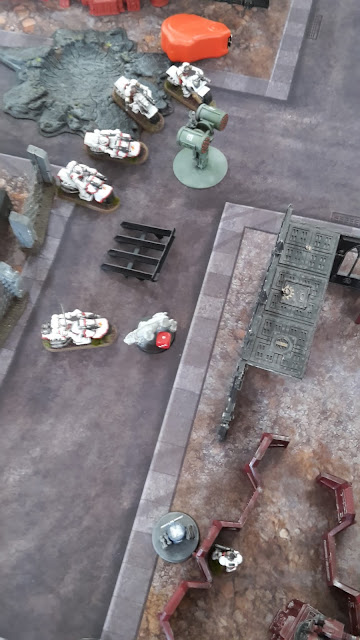 The Kill Team leader then assaulted one of the Daemons, slaying it with his Hammer of Wrath attack. At the end of the turn, the White Scars Scout managed to sabotage one of the objectives and destroy it. 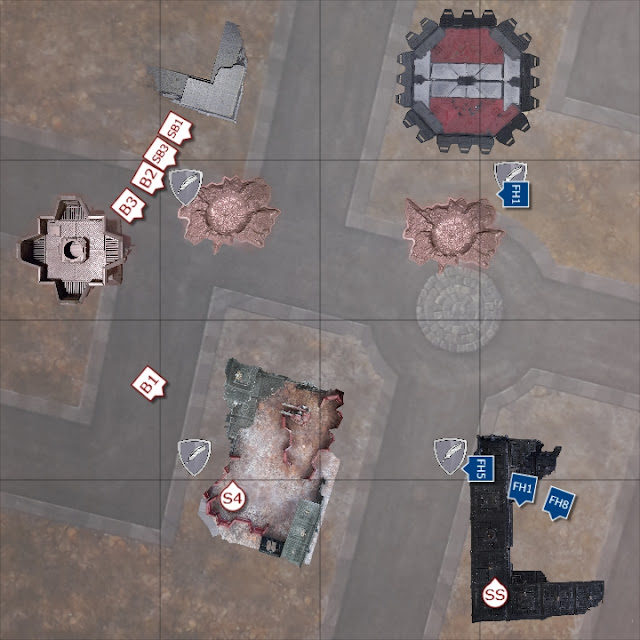 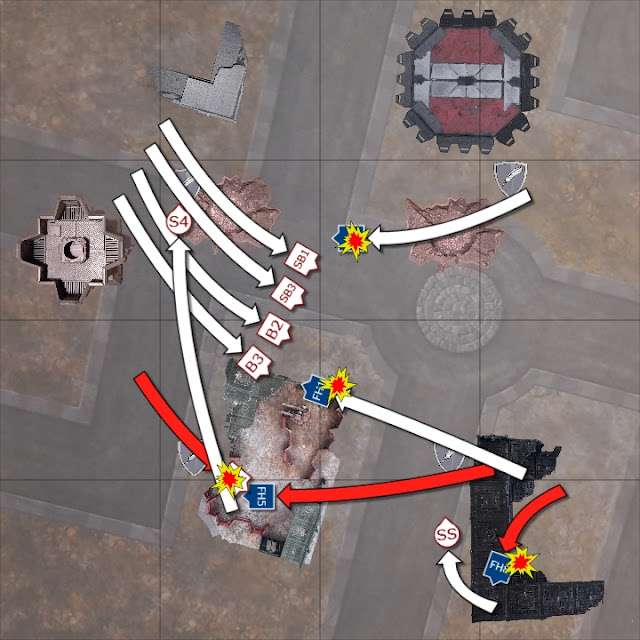 With over half the Daemon forces gone, Tom had to start taking Break Tests for his Kill Team. He managed to pass all four tests on Ld 7 and the game kept going. 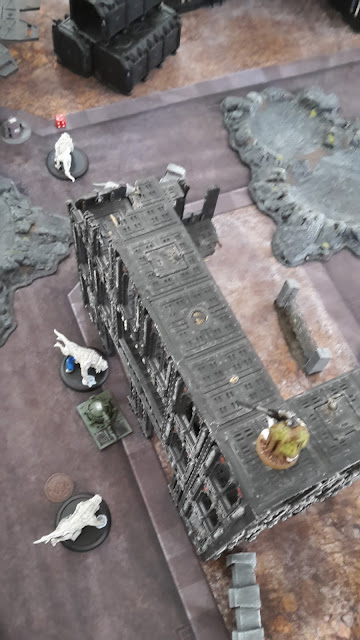 Three of the Hounds turned their attention towards the other White Scars, while one advanced on the Sniper Scout. 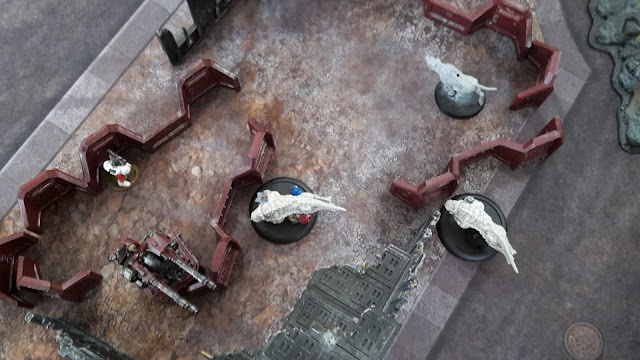 One Hound assaulted the Sniper Scout, the Daemon losing a wound to the overwatch fire. Both combatants struck at one another, but neither fell. The White Scar hit and ran from the combat.

Another Hound assaulted the second Scout, but failed to cause any damage in combat, the White Scars' Scout hit and ran from the combat. 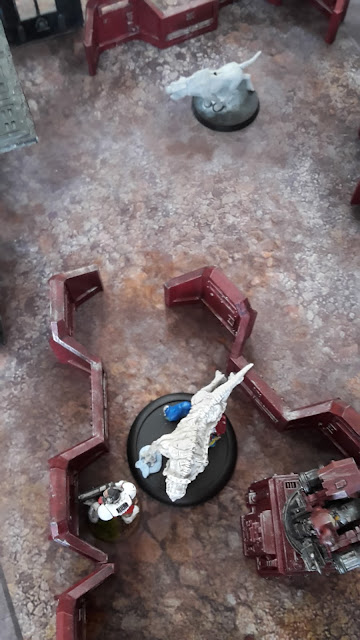 The White Scars leader advanced on one Flesh Hound, while the Sniper Scout moved away from the foe. The Bikers advanced on the remaining Daemons. 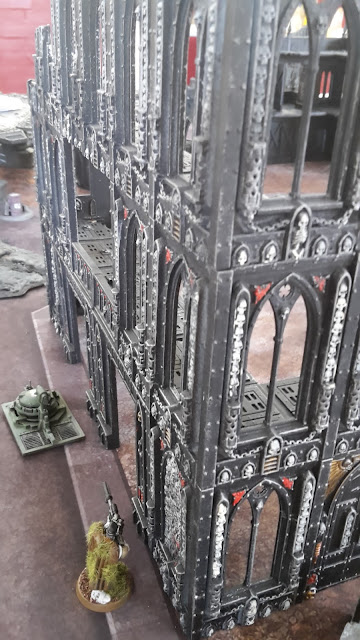 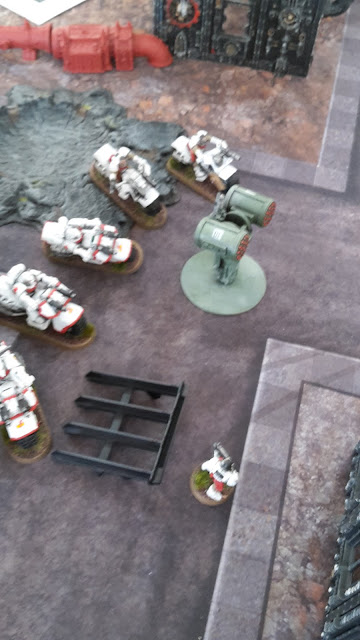 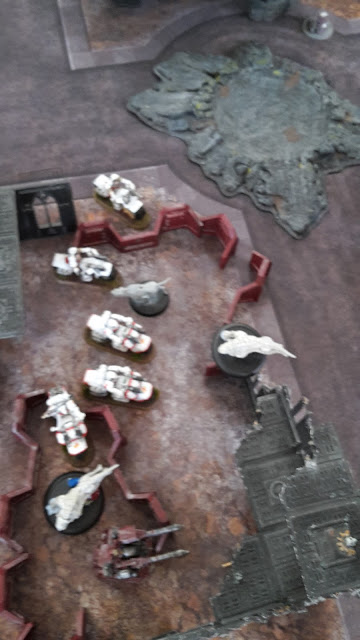 The White Scars fired at the Daemons, killing one of the enemy Kill Team and wounding another. The White Scars leader assaulted the Flesh Hound in front of him. Despite having 3 attacks with Zealot, he failed to cause a single hit in combat and was cut down in reply.

The Bolter Scout managed to take out another objective this turn. 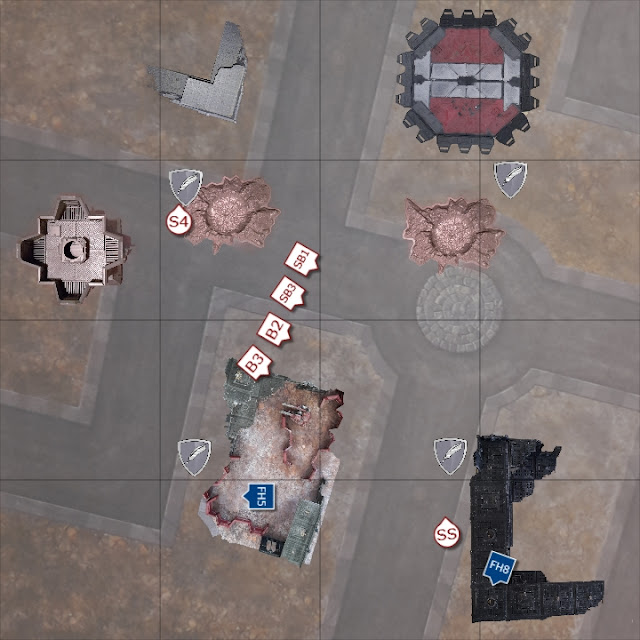 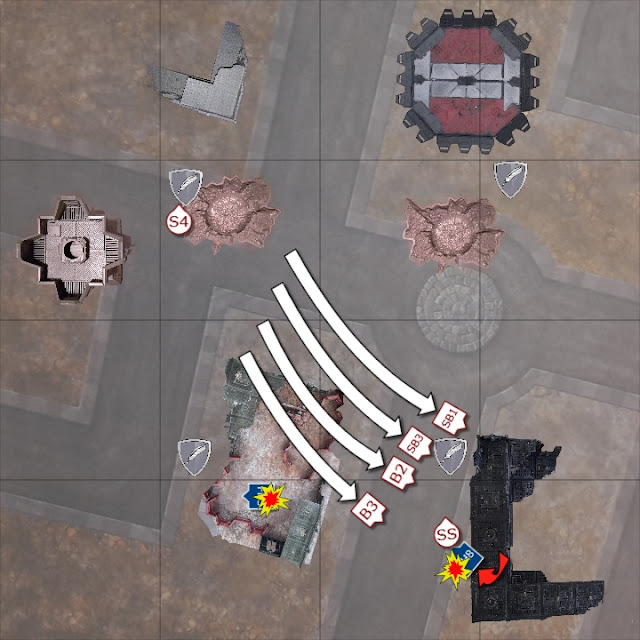 One of the Flesh Hounds was banished back to the warp (he failed his Break Test), leaving only one remaining, who advanced on the Scout Sniper. He assaulted him, but failed to kill him. The Scout hit and ran from the combat. 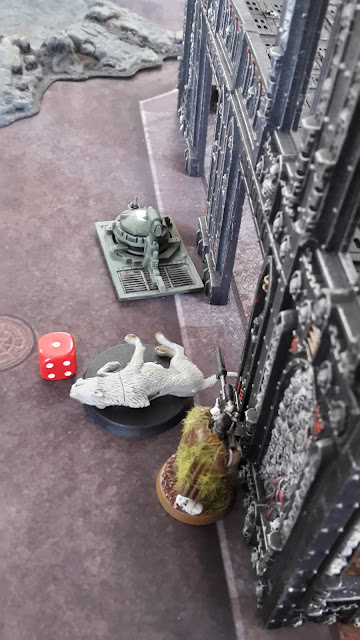 The White Scars forces advanced on the last Flesh Hound, easily killing him with their combined firepower. 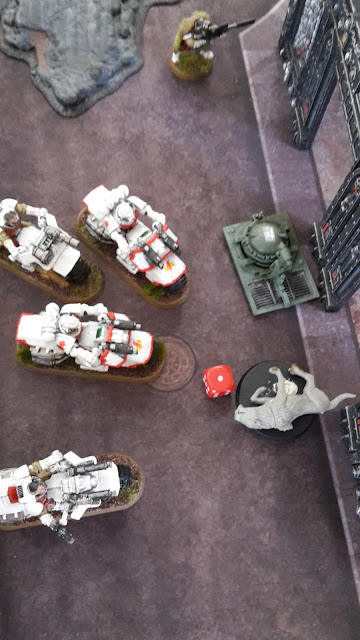 With that, the game was over. Tom scored 2 points for two remaining objectives and I scored 6 points for having 6 models left. 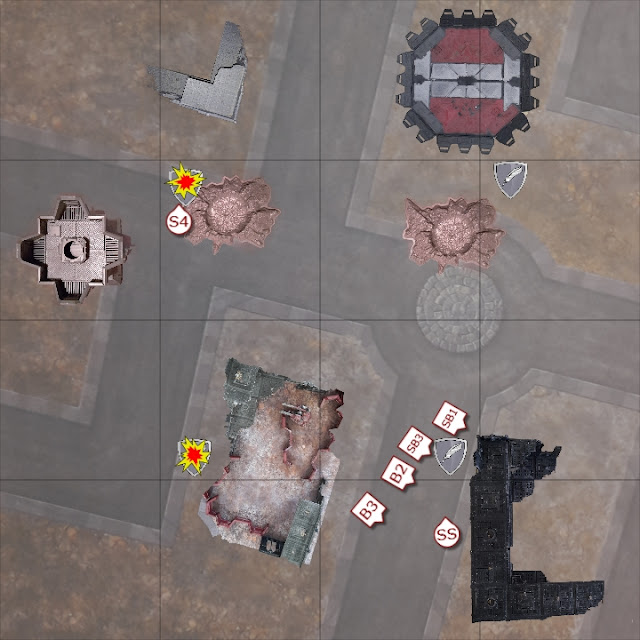 A narrow victory for the White Scars.

AFTER-BATTLE THOUGHTS
Thanks to Tom for a very close and tough game. I was seriously worried when I saw all the Flesh Hounds deployed on the board.

Despite wiping out Tom's army, it was a very tough game. I did not get points for killing enemy models, only for my surviving models, so I had to balance taking out the Daemons with keeping my own army alive.

I did get very lucky in the last two turns as Tom failed to take out my two Scouts in combat, thanks in part to poor rolls on his part and some great saving throws from me.

I was really enjoying the Kill Team missions. Even though they were a low model count, they were just as tactical as a regular game and a lot of fun.