This final part of my Fall of Cadia review will take a look at the two new detachments available in the book. In addition, I will take a quick look at the new Empyric Storms table for adding a lot of psychic fun to your games of 40k. 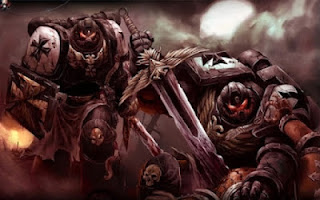 Formations
The Fall of Cadia introduced a number of new formations and detachments for an Imperial army, some of which are very useful. I will not be reviewing some of the Mechanicus formations. I don't have the codex, so am not aware of the units required or some of the special rules available, so analysis of these is limited for me.

Wrathful Crusade
This formation consists of:
The special rules grant the formation Crusader and re-rolls to all charge rolls (unit gains Furious Charge if you roll a 10 or more). In addition, if the formation includes the maximum number of units, all units gain Zealot.

This is a decent enough formation. Black Templars are not seen as the best of the Space Marine Chapters (at least, rules wise). This formation is obviously focused on assault. Crusader is nice for getting you closer to the enemy and more chance of beating them in a sweeping advance. In order to gain Zealot on all your units, you need to max out the units, the minimum cost of which is around 1300 pts. In an 1850 pts army, that leaves you a fair amount of room for weapons upgrades or increasing the squad size. Getting Fearless and Hatred re-rolls on your whole army is great, but it is probably not an optimal army build in most games. The formation could be fun, but I don't see it being used all that often.

Castellans of the Imperium Detachment
This detachment is a super-Imperium force, allowing you to take units from a number of armies, including Space Marines, Astra Militarum, Adeptus Sororitas, Imperial Agents and Imperial Knights. This allows you to take a hugely variable force, essentially picking and choosing the best units from each codex and combine them in a single army.

The number of units available in each slot is simply staggering. For example, the Troops section consists of an Infantry Platoon, Astra Militarum Veterans, Battle Sisters Squad, Militarum Tempestus Scions, Crusader Squad, Scout Squad and Tactical Squad.
The HQ section has a large number of characters, including the Space Marine characters, Commissar Yarrick and a Ministorum Priest.

The Command Benefits for the formation are as follows:
Zealous Defenders- all units have the Hatred special rule. If the detachment contains the maximum number of units, all units have the Zealot special rule.
Flock to the Front Line- Each time a Troops unit is destroyed, on a roll of a 5+ an identical unit is placed into ongoing reserve.
Lord Castellan- Warlord trait re-roll.

This formation is pretty powerful. Not only does it give you a huge variety in the units to build your army, the chance to recycle Troops units during the game is huge too. This would work well for Scout units, allowing them to outflank when they re-appear so that they don't have to run up the table.

In addition to that, almost all the transport vehicles are available in the Fast Attack slot. You could have your Meltagun Astra Militarum Veteran units in Drop Pods once more. You could have a tactical squad in the Fast Taurox Prime. You can have your Cullexus Assassin in a Drop Pod and have him strike at the heart of the enemy psykers before they can outrun him. You can put any of your units in a Rhino or Razorback. One tactic I have seen mentioned a lot is to take Inquisitor Coteaz in the detachment, thereby making all the units Objective Secured. Move over Gladius, there is a new detachment in town.
This detachment has the potential to help you build a highly thematic army, or build the ultimate cheese fest.

Having Hatred on all the units in the formation is a great bonus to help you out in combat. I don't see your army getting Zealot all that often, as you will need to take at least 3 Imperial Knights, plus a whole host of other units to get the bonus.

This is an amazing detachment and I can see it being used a lot in the future.

Empyric Storms
This table gives you a way to add the effects of huge warp storms to your game of 40k. Some of these effects are incredibly powerful and not for the faint of heart! I can't see these being used in regular play, but every so often they could provide a lot of fun for your games.

Each player draws a card (or rolls on the table) at the start of their turn. The cards are split into 2 types- Persistent and Instantaneous. Persistent effects will affect both players for a full turn, whereas Instantaneous will occur immediately.

The Empyric Storms table features a huge number of effects to add flavour to your turns and present some interesting choices. Some of my favourites from the table are:


As you can see, there are a number of really fun effects that could have a bit outcome on the game.


I hope you have enjoyed the reviews of the new Fall of Cadia book. I look forward to trying out some of the characters and formations in the future.