Welcome to part 2 of my Special Character mini-tournament. Part 1 saw the competitors fight one on one to see who would emerge on top. Part two features a free for all on the one battlefield. As a reminder, our competitors are:
Hailing from the planet Urk, the Chosen One of Gork and Mork, the Prophet's Prophet, the Green Menace, Ghazgkull Mag Uruk Thraka! (Commanded by Seb).
She's lean, she's mean, she'll feed you your own spleen, please welcome the Storm of Silence, Jain Zar! (Commanded by Armel).
He's been around since before the Horus Heresy, but don't let this old timer fool you. He's here to eat your world, craving blood and skulls, its Kharn the Betrayer! (Commanded by Thomas).
He's the shadow on the breeze, the whisper in the night, he's Unforgiven, but not forgotten, give it up for Cypher! (Commanded by David).
Last but by no means least, the Angel in Black, the Ravenwing Master, he's pimped his ride and is ready to play, please welcome Sammael! (Commanded by me).
The rules for the battle royale were as follows:

- The battle will take place on a 4x4 table. The order of character deployment will be determined randomly (we did this by drawing the names of the character from a hat). The order of deployment will be the order of the Character's turns in turn 1 (i.e. the character that deployed first will get to go first, the character that deployed second will go second, etc).
- The order of the character's turns will be determined at random at the start of each turn after the first.
- During their turn, each character will get a full turn (movement, psychic, shooting and assault) to carry out their actions.
- In the psychic phase, the player whose turn it is rolls a D6 and adds their mastery level to the total to determine their warp charge dice. The player who had the last turn will get the D6 roll plus their mastery level to try and block any psychic powers. If another character is targeted by a psychic power, they will roll a D6 and get that many dice to try and block it (plus any mastery level).
- As this is a free for all, characters may shoot into a combat, but do so at BS2. Any successful hits are randomised between the combatants.
- Challenges may be issued. In the event of a combat involving 3 characters, a character must be specified as the target of the challenge. Both characters in the challenge can only attack one another until the challenge is resolved. Other characters in the combat can attack either of the challenge characters (this is to make challenging for any bonuses a bit more risky).
- All characters will have Hit and Run in the battle royale. Any character that already has hit and run may re-roll a failed Hit and Run test.
- All characters gain Feel no Pain (6+) in the battle royale, unless they have a better Feel no Pain already.
- Characters are subject to normal morale, so can flee from combat and get caught by a sweeping advance.

Hope that is all clear.

We randomly drew for the order of deployment. Ghazgkull deployed first, going in a crater to the north of the battlefield. Sammael then deployed opposite Ghazgkull on the other side of the board. Jain Zar went next to the West, with Cypher deploying to the East. Kharn was last. Buoyed by his previous victory, he deployed in the centre, equi-distant from all other characters. Quite right for a devotee of Khorne. 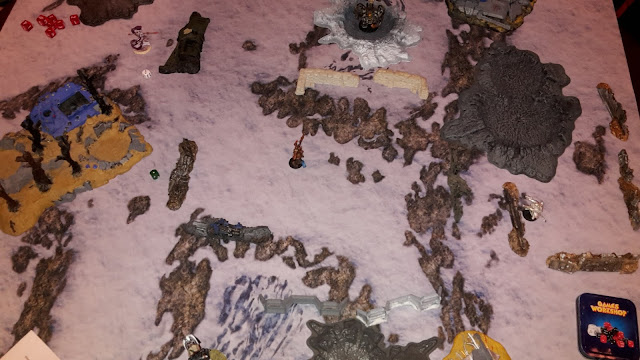 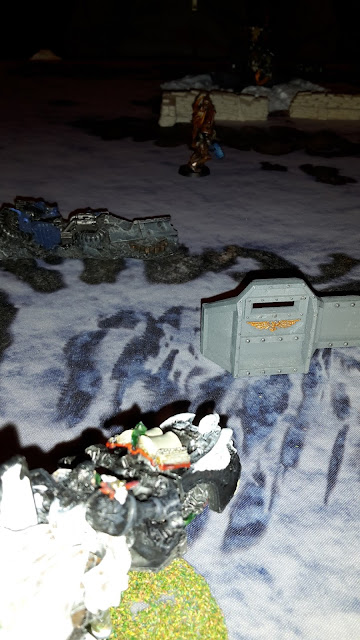 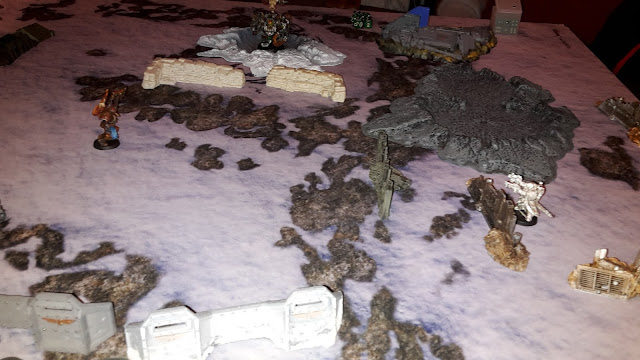 TURN 1
The battle began with Ghazgkull moving towards Kharn in the centre of the board, firing his shoota as he advanced. In typical ork fashion, he failed to hit anything with his shots. The Ork warlord then attempted to charge Kharn, but failed to make the distance.

Sammael then leapt into action, moving towards Cypher (not willing to let this chance at taking out the chapter's greatest foe). He veered his jetbike, firing his plasma cannon at Jain Zar. The shot hit, but the wound was saved by cover.

The shot made Jain Zar leap into action. She moved towards Kharn in the centre, firing at him as she advanced. The shot wounded, but was saved by the Chaos Warrior. She then charged into Kharn, wounding him twice as she disarmed his axe in combat. Kharn attacked back, causing 3 wounds on Jain Zar, but all three were saved by her armour. 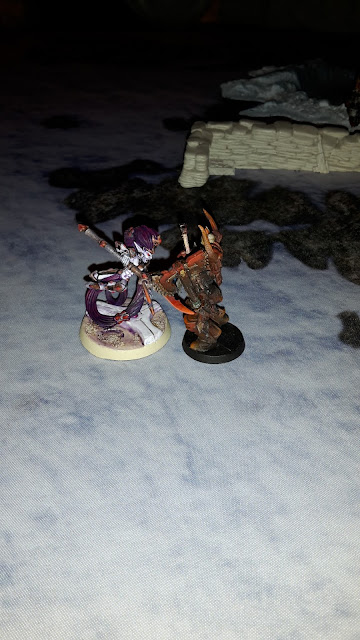 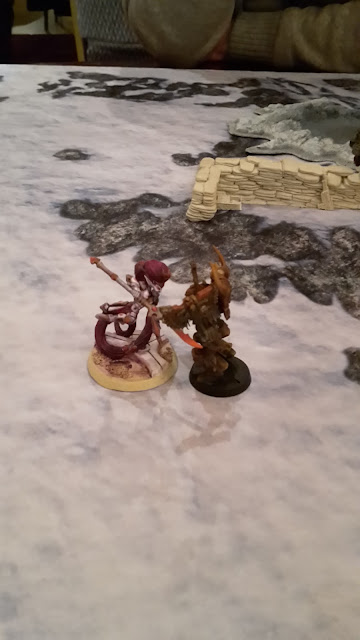 Cypher used the distraction in the centre of the field to move away from Sammael towards the crater. He levelled his pistols at the Ravenwing master, his bolt pistols struck Sammael, but the wounds were saved by his armour. 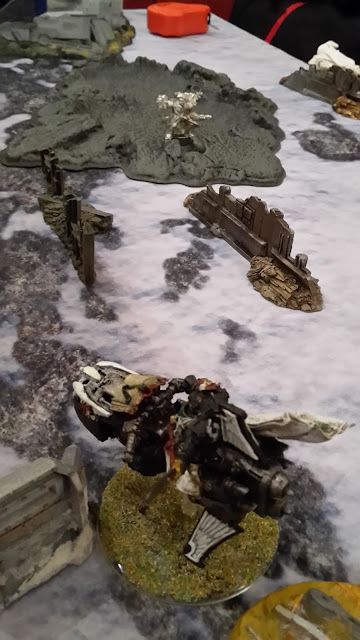 In Kharn's turn, Jain Zar finally cut down the chosen of Khorne, earning first blood for the Eldar warrior. She consolidated away from Ghazgkull. 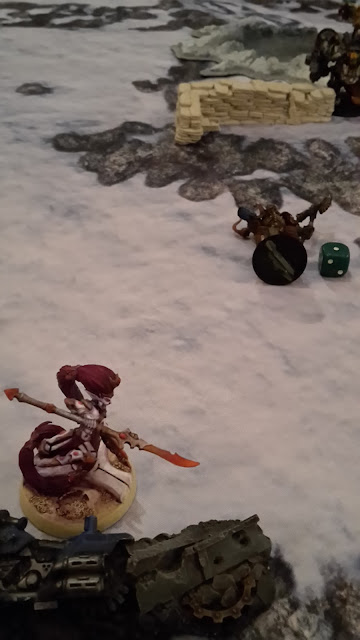 TURN 2
Ghazgkull was first off the mark again, calling a mighty Waaagh as he advanced on Jain Zar, and charging her. The overwatch shots caused no damage against the bulk of the Ork warrior. Jain Zar called out a challenge that Ghazgkull was eager to accept. The Eldar warrior struck, wounding Ghaz once, but the Waaagh energy coursing through him saved the blow (the 2+ invulnerable save didn't hurt either!). Ghazgkull struck back, but failed to hit the swift aspect warrior. 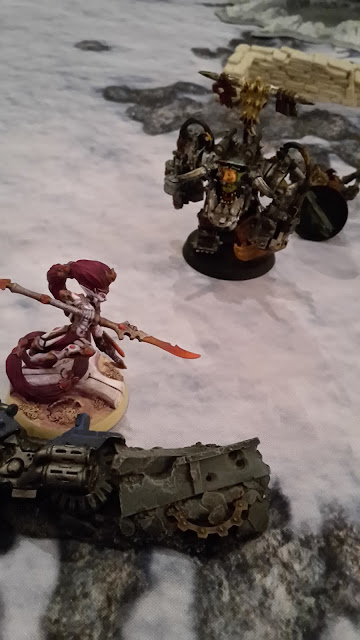 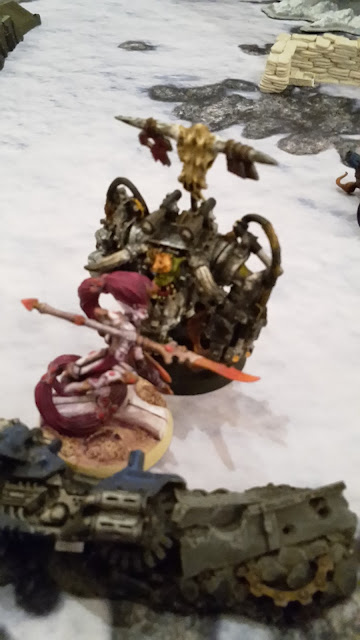 Cypher went next, targeting Sammael once again with his bolt pistol and plasma pistol. He wounded him three times, but his armour proved too tough to get past.

Jain Zar struck at the Ork once again and actually managed to wound him (despite his 2+ invulnerable). Ghazgkull struck Jain Zar, but without his power fist, he was unable to get past her armour.

Seeing the Ork and Eldar warriors engaged in combat, Sammael took the opportunity to deal with both. He advanced on the combat, firing into the swirling confusion of the battle, but to no avail. He charged into Jain Zar as her attention was elsewhere, but failed to hit the fast moving warrior (needing 5's to hit thanks to Jain Zar's special rules). Jain Zar struck at Ghazgkull, but was unable to cause any damage. Ghazgkull then struck back, hitting the phoenix lord three times, but then rolled a triple 1 to wound! 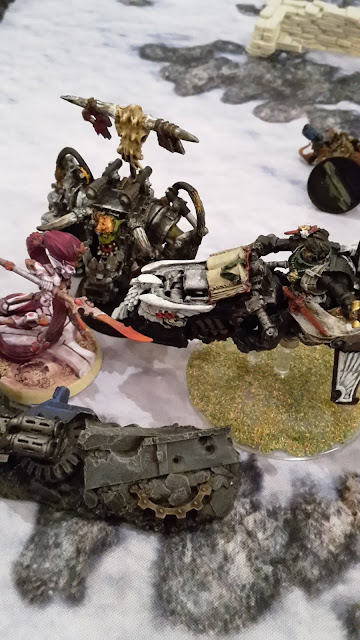 TURN 3
With three of the four competitors locked in combat, Sammael's turn began. Jain Zar struck at Ghazgkull, wounding him 3 times and finally slaying the Ork. Sammael struck at Jain Zar, hitting twice, but failing to cause a single wound with his attacks. He then was able to Hit and Run out of combat, moving towards Cypher. 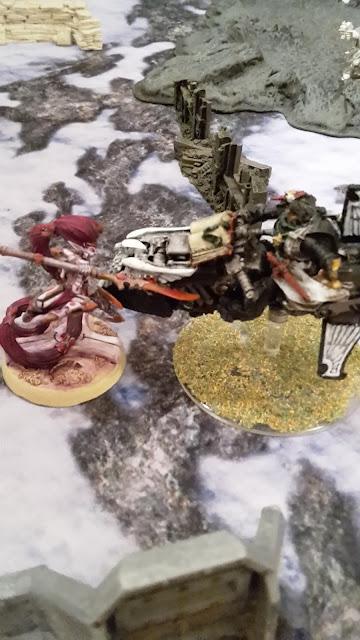 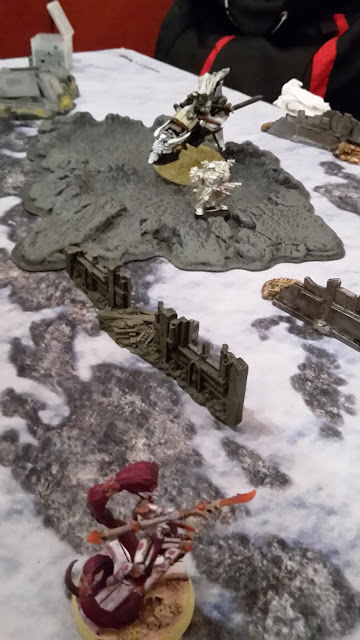 Freed from combat, Jain Zar advanced on the retreating Sammael, firing at him but failing to harm the jinking warrior. She launched herself into an assault, striking at the Ravenwing master and wounding him once. Sammael struck back, wounding the Eldar warrior, but failing to get past her armour and failing to hit and run.

Cypher fired his pistols into the combat, striking Jain Zar with his plasma pistol and wounding her to leave her on one wound.

TURN 4
The combat between Jain Zar and Sammael continued. The Phoenix lord struck at Sammael but failed to wound him. Sammael then struck at her, rolling a triple 6 to hit. He wounded her once, but failed to get past her armour.

Cypher then fired into combat. His bolt pistol struck Jain Zar twice, wounding her twice, but her armour saved her. The plasma pistol hit Sammael, but his Iron Halo blocked the damage.

In combat, Jain Zar and Sammael struck at one another, but their respective armour was too strong and the combat was a stalemate once more. Sammael managed to disengage from combat (despite being Initiative 1) and Hit and Ran 12" away.

TURN 5
Sammael moved up once more on Jain Zar. He fired his storm bolter at the Eldar warrior and actually managed to kill her!

Cypher fired on his ancient nemesis once more, but was unable to harm the jinking rider.

TURN 6
Sammael launched himself at Cypher, firing his storm bolter, but to no avail. He crashed Corvex into the Fallen Angel. Cypher struck at Sammael, wounding him once. With a fury rarely seen, Sammael struck at Cypher, killing his unforgiven opponent. 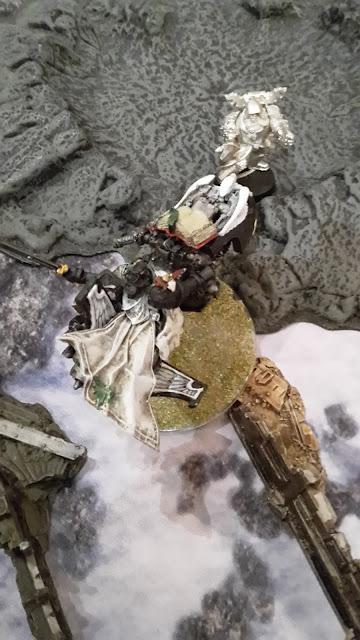 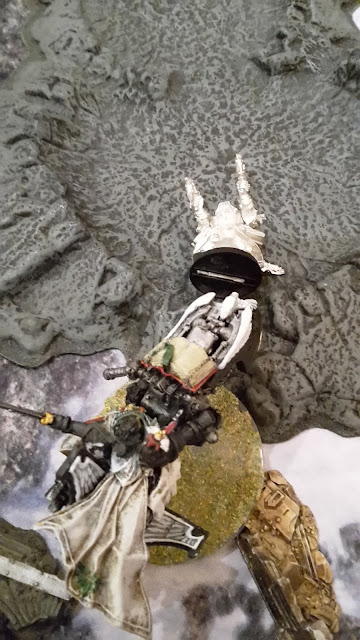 He turned to see he was the last competitor standing and had emerged victorious!

Sammael was the champion of the Battle Royale.

AFTER-BATTLE THOUGHTS
Another fun game and a break from the norm of regular 40k match ups.

A very different result from the one on one tournament. Kharn, the winner of the last event, was first to perish this game as Jain 'Megan' Zar wanted revenge for her defeat in the last game.

I should have gone after Cypher with Sammael in turn 2 (much more thematic), but with Jain Zar locked in the challenge with Ghazgkull, I thought that would be the best chance to best her 2+ save. As it was, I failed to hit with any of my attacks thanks to her special rules (-5 to WS and I in combat!). I thought her powerful abilities would once again prove the undoing of all the competitors, but it was a Storm Bolter that ended her killing spree.

The final fight between Cypher and Sammael was a nice ending, but the Fallen Dark Angel was outclassed by Sammael and the lack of an invulnerable save was too much in the end.

I have rather enjoyed the last two battle reports. It's nice to have a break every once in a while and do something a bit more unusual in 40k. Hopefully, I will run the mini-tournament again at some point in the future and see if the result is any different.
﻿
Posted by Mike (St Andrews Wargaming) at 09:00