I thought that I would share with you an interesting article that my Girlfriend found on gender equality in the model range of 40k.
http://www.themarysue.com/warhammer-40k-gender-representation/ 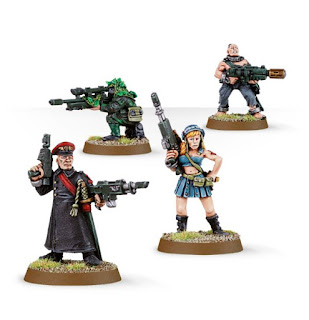 I found it to be a very good discussion on the lack of female models in much of the 40k range and how Sisters of Battle are largely neglected. I would recommend that you give it a read.
The lack of diversity in the range may not be too surprising given the demographics of the player base for 40k (based on my own experience, not any hard data), but the background does have some great female characters.
I don't read too much of the Black Library material, but I love the Gaunt's Ghosts series of novels. These feature some great female main characters that could easily be added to the current Tanith 1st range.


This could be a double-edged sword, as I can't be the only player who sees the older Daemonettes, Wyches and Dark Elves ranges and cringes.
My girlfriend has had no interest in playing 40k. She fully supports my love of the game, even allowing me to take over the larger of the spare bedrooms in the house to devote to my massive collection of terrain, armies and random polystyrene, and is perfectly happy for me to disappear once a week to go gaming without too much complaint. However, she is an amazing artist and would probably paint miniatures to a far better standard than I am capable of if she wanted to. After reading the article, she claimed that she would love to spend a fortune on a Sororitas army.
Unfortunately, a fortune would be accurate, with many of the models in the range being metal and a severe lack of plastic kits. Sisters of Battle are one of the most neglected armies currently in 40k. I have seen countless players bemoan the lack of support in the form of a new Codex or models. From what little I know of them, they have a decent background and some really nice figures that are generally non-sexualised.
I wonder how many new players GW could bring in to 40k by making Sisters of Battle one of the premier armies in the current game? I know of at least one who would be interested.
I think that a new Sister of Battle Codex and miniature range would fly off the shelves and might even be able to bring in some new players and diversity to the 40k universe. Would you agree or is this just a pipe dream?
Posted by Mike (St Andrews Wargaming) at 09:00