The campaign is back! After the Christmas break, the Medusa IV campaign was ready to begin again, with the players making their moves for the first phase of turn 4.
Many of the players evidently used the break for construction, as there was a flurry of Manufactorums assembled (6 in total) and a shield generator. Many of the players continued to try and expand their territory with unclaimed land, while the White Scars to the North came under renewed attack from the forces of Chaos. 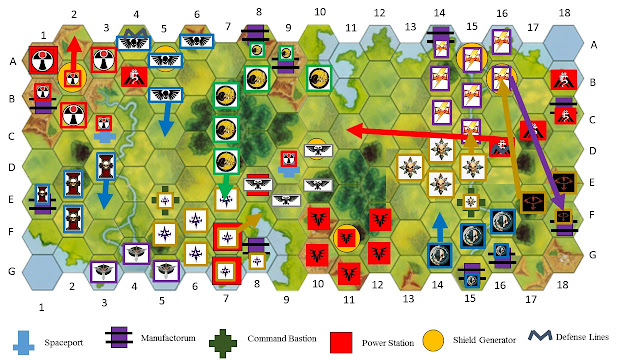 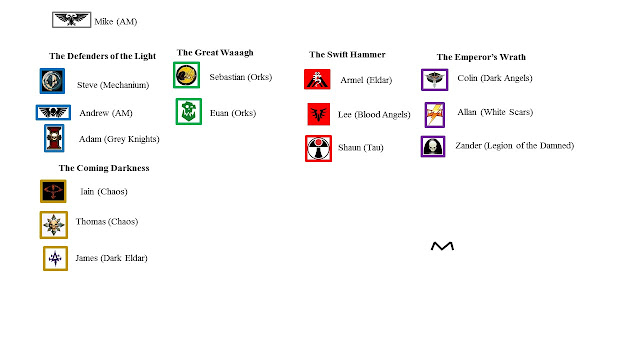 One change that can be seen on the map is the withdrawal of the Cadian 201st from the sector. The Ordo Malleus had been observing the battle from afar: The original deployment of the 201st Cadian was to enforce Imperial law and to try and assert a dominant Imperial governing body on the planet. Whereas, the Mechanicum and the additional Astra Militarum regiment have been having some success, the 201st have been requisitioned back to Cadia following the 13th Black Crusade assaulting the Cadian gate.
The civilian populace became incredibly concerned given the withdrawal of Imperial troops in the area, however, they had been ordered to relocate for reasons unknown before the 201st departed, being informed that it is by order of the Ordo Malleus. In the stead of the 201st, the Ordo Malleus has decreed that due to the confirmed reports of Chaos forces on the planet, as well as the threat of Tau forces suspected of trying to seize the planet as a new addition to the empire. The combined forces of Chaos and Xenos, as well as the abhorrence of the Imperial factions fighting against one another, the Ordo Malleus has decreed the deployment of the Grey Knights to purge the enemies of Man and restore some semblance of order. The Grey Knights sent were the 12th Brotherhood under the command of Brother-Captain Amellius. Their orders were to assist the Alliance the 201st was fighting for, however, not to announce their presence if possible to them. Merely, if they so happen to be in the same place at the same time, to assist them. But otherwise, the Knights are to continue with their conquest. Civilians, if any choose to stay in the area, that encounter the Grey Knights are to be dealt with. Severely.
(Adam decided that he wanted to change his force from Astra Militarum to Grey Knights. He provided some background to explain the sudden change).
The next big change is that we may be adding new players to the campaign. A few of the club members have expressed an interest in joining the campaign and they will hopefully be starting in the next few weeks. ﻿
Posted by Mike (St Andrews Wargaming) at 09:00