With the campaign having drawn to a close for the holiday period, I was having a think about how to improve it for the New Year. Inspired by the Cityfight and Planetstrike expansions of old, I decided to make up some Campaign Stratagems for the players to purchase with the resource points they earn throughout the campaign. 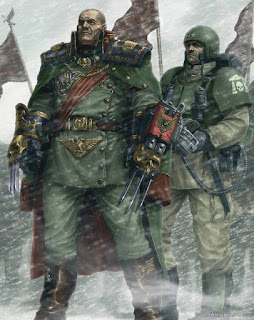 Air Drop
Your air force has mobilised to allow you to drop your troops in to overwhelm the enemy lines and ensure your victory.
Select one unit/model in your army (that is not a Superheavy vehicle or monstrous creature). That unit must start the game in reserve and gains the Deep Strike special rule. If the unit/model already had the Deep Strike special rule, it may re-roll the scatter dice when it arrives via Deep Strike. This Stratagem may not be used on a vehicle that does not already have the Deep Strike special rule (sorry, no Deep Striking Land Raiders for you marine players).
Decoy
Your army has set up a careful series of decoy units for the enemy to track using sophisticated sensor ghosts and holographic displays (or helmets on sticks in the case of the Orks). This confuses the enemy and throws their plans into disarray.
Select one unit/model in your army (that is not a Superheavy vehicle or monstrous creature) after both sides have deployed. You may re-deploy this unit anywhere in your own deployment zone. Note that this unit may not make a Scout move before or after re-deployment.
Orbital Bombardment
Your assault is preceded by a massive bombardment of the enemy position, forcing them to take cover as you advance.
Roll a D6 for each infantry unit in the enemy army.  On a roll of a 6, the unit suffers D6 S4 AP- hits (randomised). The unit does not take a morale test if it suffers enough casualties to require one. If the unit suffers an unsaved wound, it must take a pinning test.
Inspiring Orator
A lone hero rises up to inspire your troops, turning the tide of the battle and aiding your forces in holding firm.
At the start of an assault phase, choose one unit in your army. That unit gains the Stubborn special rule until the end of the following assault phase. In addition, the unit adds 1 to the combat result of any assaults it is involved in during this time.

Co-ordinated Assault
High Command has utilised their communications network to ensure that your forces arrive in the right place at the right time.
Once during the game, you may choose to re-roll one Reserves roll. In addition, you may add or subtract one from the result of the re-roll.
The Strands of Fate
Fate or the Gods have smiled upon your army, favouring you in some small way to help on the path towards victory.
Once during the game, after the start of turn 1, you may re-roll a single result. This could be a single to hit roll, to wound roll, armour save, etc., or multiple dice results such as a single morale check (in which case both dice are re-rolled).

So these rules will be introduced in the next phase of the campaign. Hopefully, they will lead to some fun interactions among the players.
﻿
Posted by Mike (St Andrews Wargaming) at 09:00