I know, I know, I'm a little late to the party with the Age of Sigmar, I've just been enjoying the new Space Marine and Dark Angels codex too much to get in to it. I finally got round to playing my first game of Age of Sigmar at the club last week against Matt's Orcs and Goblins.
My army consisted of:
Vampire Lord
Necromancer
9 Black Knights
3 Crypt Horrors
30 Zombies- standard bearer
20 Skeletons- Champion, Standard bearer, Musician
Corpse Cart
I took a nice mix of troops and heros from the war scrolls to try and have a bit of variety for my first game.
Matt's army consisted of:
Orc Warboss
Orc Shaman
18 Boarboyz
27 Wolf Riders
2 Stonethrowers
Doom Diver
Spear Chukka
Giant
Some fast moving units and a lot of shooting to go up against. 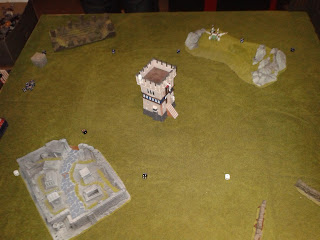 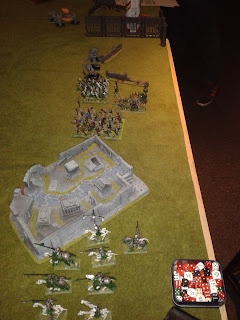 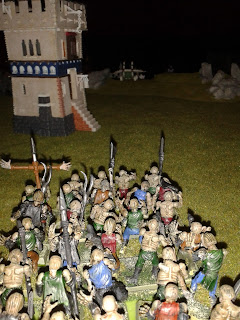 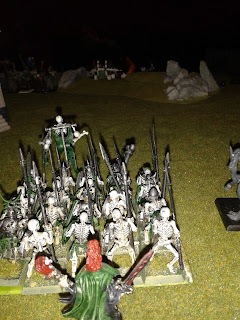 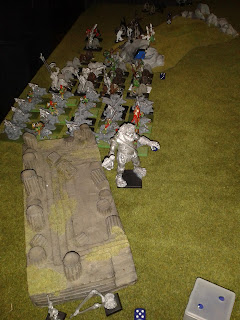 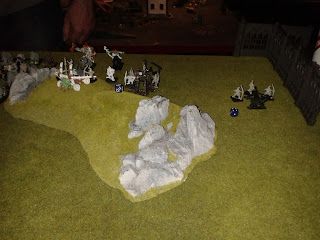 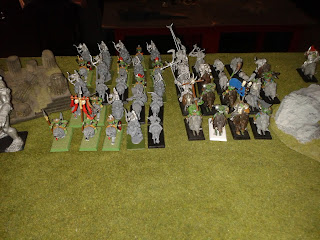 I got the first turn and started the game.
TURN 1- VAMPIRE COUNTS

In the hero phase, the vampire used his inspiring presence on the black knights in front, then raised a unit of 10 skeletons in front of the knights.
In the movement phase, the army moved up on the orcs, there was no shooting or charges this turn. 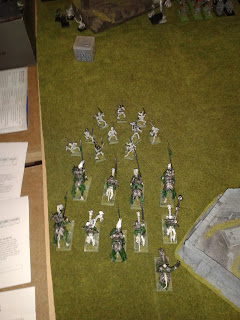 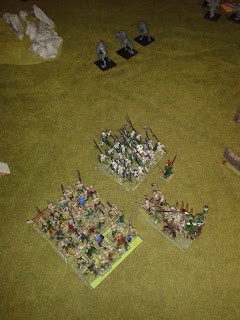 With a bellow, the Warboss used his inspiring presence on the boarboyz, the Shaman was too far away to unleash his waaagh magic yet.
The wolf riders and giant advanced on the skeletons. The boarboyz advanced on the bulk of the vampire army. 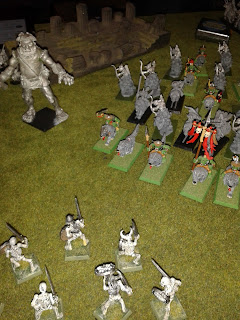 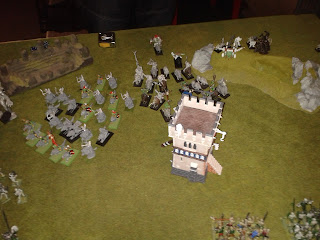 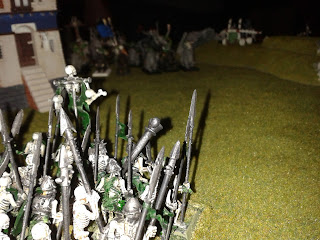 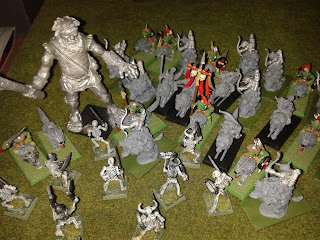 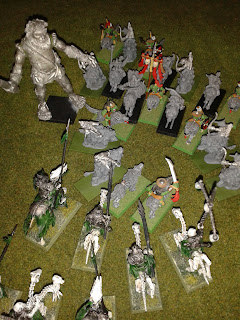 We rolled off for turn 2, and Matt got the second turn.
TURN 2- ORCS AND GOBLINS

The Warboss once again gave the boarboyz his inspiring presence.
The boarboyz advanced on the crypt horrors, while the Giant and wolf riders moved to engage the black knights. 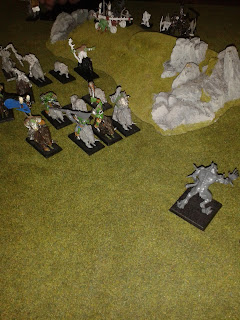 The spear chukka fired at the crypt horrors, but the shot went wide. The bolt throwers fired at the skeletons again, one failed to hit (on a 1) and the other killed three skeletons. The wolf riders fired at the vampire lord, causing 5 wounds, only one of which was saved. The doom diver saw the vampire stumble and finished him off, the ignominy compounded by the indignity of the flailing goblin slaying the mighty warrior.
In the combat phase, the boarboyz charged the crypt horrors, while the giant and boarboyz re-charged the black knights.
The giant swung at the knights, his attacks causing 9 wounds and killing 4 knights. The crypt horrors struck at the boarboyz, but only managed to slay one of the boar riders.  The wolf riders then struck at the black knights, killing one of the undead riders. The knights struck back at the wolf riders, but the two remaining knights were unable to kill any of the riders. With a waaagh of fury, the boarboyz killed all three of the horrors, wiping the unit out. 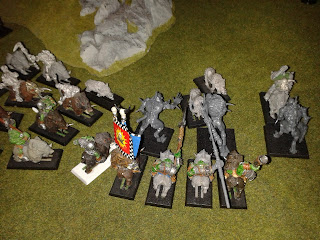 Again, no units suffered the effect of battleshock this turn.
TURN 2- VAMPIRE COUNTS
Drawing upon their unholy power, the Knights recovered two models and the skeletons raised another three from their banners. The Necromancer cast Vanhel's on the zombies, ready for them to attack.
The skeletons and zombies advanced on the boarboyz, while the knights wheeled round to engage the wolf riders. 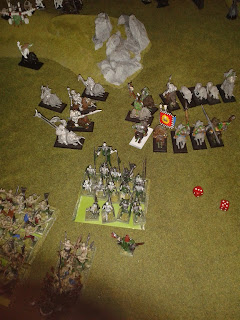 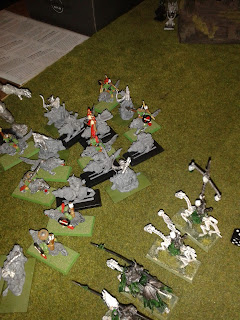 In the combat phase, the Knights, zombies and skeletons charged. The zombies struck at the boarboyz causing 6 wounds, only one of which made it through the armour. The boarboyz struck at the skeletons and zombies, slaying 7 skeletons and 8 zombies. The knights struck at the wolf riders, killing two of the goblins. The wolf riders attacked back, causing 5 wounds on the knights in retribution. Thanks to Vanhel's, the zombies struck once again, causing 9 wounds on the boarboyz, only two of which made it through the armour. Finally, the skeletons struck back, but could not cause any wounds. 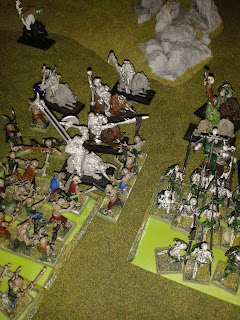 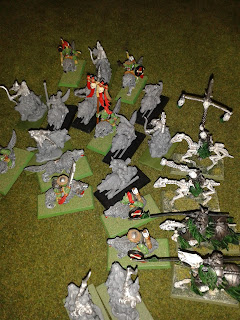 At the end of the turn, the skeletons lost 1 member to battleshock.
At the end of turn 2, the orcs had lost 9 of their mob, while the vampire counts had lost 44 models. The battle was almost over for the forces of the undead. Matt won the roll off for turn 3.
TURN 3- ORCS AND GOBLINS
The Warboss once again used his inspiring presence on the boarboyz. The Shaman summoned his unearthly powers to stomp the corpse cart with the foot of Gork, causing 3 wounds on the construct.
There was little movement as the greenskins sought to finish off the undead. The spear chukka fired at the necromancer, causing 3 wounds on the death wizard, one of the rock lobbas finished the job, killing the necromancer. The other rock lobba fired at the corpse cart, finishing off the undead vehicle. The wolf riders fired at the Knights, killing one and reducing the unit to one member.
At the end of the shooting phase, I had one Knight, 6 skeletons and about 20 zombies left, about to get charged and wiped out by the Orc and goblin army, so I conceded the game there. A crushing victory for the Orcs and Goblins. 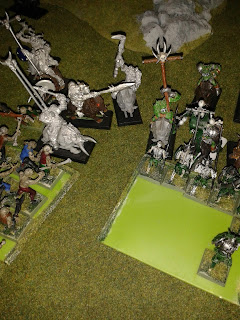 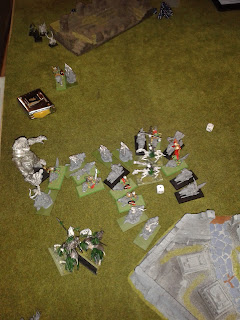 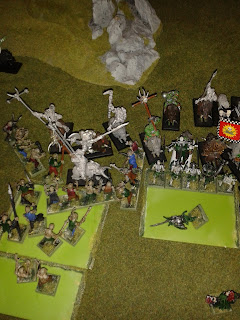 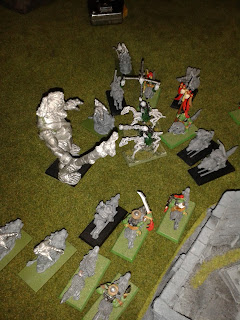 AGE OF SIGMAR- FIRST IMPRESSIONS:
For weeks now, a lot of people have been telling me that Age of Sigmar is a lot of fun, it's not the way warhammer used to be, but they had an absolute blast playing it. Based on the game I just played, I do not see the appeal.
There are several issues with my first game that I wanted to focus on:
1. POINTS VALUES- There has been plenty said online about the loss of points values for Age of Sigmar. Before the game, Matt and I talked a little about the kind of game we wanted to play, I said I wanted a small game to try out the rules for the first time.
At the start of the game, I had 65 models on the board (7 battle scrolls) versus Matt's 51 models (9 battlescrolls). Based on this, if I had deployed 3 more models, Matt would have been eligible for a Sudden Death victory. Based on the above game, it is pretty clear that Matt did not need any extra help in winning and decimating my army. For me, the model to model balancing does not work so well when there are vast differences between the battlescrolls. One of my hardest hitters on the board, the crypt horrors managed to do one wound against the boarboyz (my rolling was abysmal and the re-rollable armour saves on the boyz were insanely good) and were wiped out in return.
At a rough estimate, I had about 970 pts in my army and the Orcs and goblins had about 1300 pts. I know the comparisons aren't the same as the abilities of units has changed from 8th edition, but in my opinion, the Orcs were a superior force, despite being outnumbered.
2. SHOOTING PHASE- I think that the shooting phase has got a lot more powerful in Age of Sigmar. Units with shooting attacks no longer need to choose between moving and shooting for most effective firepower and can now shoot and assault in the same turn (even shooting at and charging different units). There is also no way to lock enemy units in combat, meaning that missile units can always fire their weapons, even if they are in combat. For an army with minimal shooting like the Vampire Counts, this boost to the shooting phase is a huge blow as they have been diminished in several other ways (which I will come on to).
3. MAGIC- As a Vampire Counts player, magic played a huge part in my army previously. I used to run a high level Vampire Lord and several necromancers and could normally count on a good magic phase to boost the abilities of my army. The current changes to magic means that only one spell can be cast per wizard per turn. Some spells are easier to cast now and safer with the loss of irresistible force. Undead wizards still have the ability to raise undead units and boost them with extra abilities, but it didn't seem as effective as in previous editions. I like the ability to resurrect slain models that was provided by invocation in 8th edition. In Age of Sigmar, many units have this ability inherently, their banners allowing them to raise D6 or D3 new members. This is a nice ability to have for free, but it only occurs every hero phase, meaning you can have the situation where your unit has to weather 3 combat phases and 2 enemy shooting phases before you can raise fresh troops (as it was in the game above). I found that where magic was a key feature of my games in 8th edition, it was not too powerful in Age of Sigmar and my army suffered for it.
4. CHARACTERS- One similarily between 8th edition and Age of Sigmar is that characters are key for the success for the vampire counts army. In Age of Sigmar, Vampire counts characters are very powerful in boosting the combat abilities of the troops under their command. However, it is now impossible to hide characters in units, making it easy for the enemy to take them out with shooting or magic. Matt was able to take out my two characters quite easily, thereby robbing the army of the ability to boost the troops or summon more units.

5. TURN MECHANIC- I really dislike rolling for who goes first each turn. I think that getting two turns in a row is a huge boost and removes a lot of tactical play from the game. It is hard to set up a battle plan when your opponent can get two rounds of magic, shooting and charges in a row and you are just left to watch and make saving throws. In the first turn, I had set up the crypt horrors to assault the Ork war machines and the Knights to attack the wolf riders. As it was, Matt got two turns in a row and was able to deal with the Knights and Crypt horrors and take out the vampire lord, all three heavy hitters from my army were gone by my second turn and all I had got to do so far was move my units (and fight in the odd combat).

6. BASES- Now, using square or round bases doesn't make a huge difference to me when playing Age of Sigmar, but using the regiment bases (the one four or five models wide) does have some influence. The regiments bases limit the ability to fully engage with the enemy units and can lead to fewer attacks. Not a major deal and not enough to make me re-base my collection, but it is an annoyance.
Overall, I'm not wild about the new game, I really did not have a lot of fun playing it. I did not set out to be so negative about Age of Sigmar, I had read a lot of great things online and there were a lot of people at the club talking it up and saying how much fun the games were and I was looking forward to playing some games. It may just be that (in my opinion) the Vampire Counts have been quite strongly neutered or that I am just used to playing fantasy as it was. Has anyone else played Age of Sigmar and enjoyed it? Should I give it a few more games to have the "fun" everyone is talking about?
Posted by Mike (St Andrews Wargaming) at 09:00